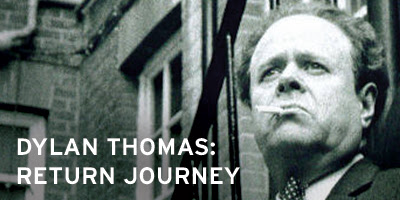 With the unusually slow fade of the lights and the appearance of Bob Kingdom as Dylan Thomas, you have that strange feeling of stepping back in time.  The play is fashioned like one of Thomas’s popular lecture tours and actor, Bob Kingdom, is the very personification of the man.

Dylan Thomas died before his time in 1953, but his poetry and stories live on.  He was in demand as a speaker for some years before his death.  Listening to the material presented here, you realize what was lost with his early demise.

The show presents selections from his work and Bob Kingdom delivers the words to perfection, his melodic Welsh accent carrying us along willingly as he fleshes out the various colourful characters who dotted Dylan Thomas’s stories.  It’s funny and sad and a beautiful evocation of his life and times in Wales.  The actor’s superb presentation of some of the most well-known poems brings out meanings that were never apparent from the printed page.

The presentation is simple – just a lectern, a chair and a black curtain - but the subtlety and depth of Bob Kingdom’s naturalistic performance is remarkable.  You can only imagine how much work went into making this look so real.  Anthony Hopkins has directed the show with great care, obviously trusting the material and the actor.

If Dylan Thomas to you is just ‘Under Milk Wood’, this show will give you a much broader understanding as to why he is considered one of the great writers of the 20th Century.