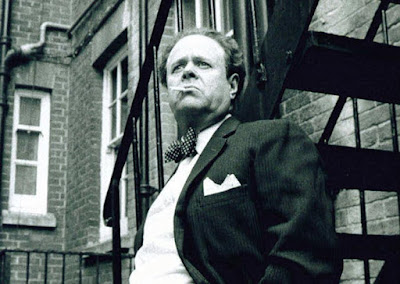 
In 1953, months before his death, Dylan Thomas began his final American tour of public readings of his poetry.  “Dylan Thomas: Return Journey” is a recreation of what it would have been like to sit in on one of those readings, with Bob Kingdom’s incarnation of the poet as close as it is possible to come to spending an actual evening with Dylan Thomas.
Because the show is a recreation of Thomas’ final performances (with readings of poetry and smatterings of reminiscence), the audience is left to supply a lot that is left unsaid, in particular the context of Thomas’ destructive marriage and spectacular alcoholism.  But for the informed viewer this trade-off is more than worth the illusion that this really is Dylan Thomas, with Kingdom’s musical intonation of the poems eerily close to recordings of Thomas himself.  His rumpled, hangdog face is genuinely weary - the suit is pressed, but the face needs ironing.
Kingdom does a fine line as a raconteur, but Thomas’ poems provide the most powerful moments of the night.  Thomas is an unusually clear and rhythmic poet with a gift for finding the most explosive word.  A Thomas poem is a sequence of controlled detonations.  Predictably, “Do not go gentle into that good night” becomes the poet’s epitaph.
The original direction by Anthony Hopkins is straightforward, shaped by the decision to recreate the experience of watching Thomas himself rather than giving us deeper insight into his life.  The set is limited to a podium and a chair, with the most dramatic variation in the staging whether Kingdom is performing behind the podium or in front of it.  Fortunately Kingdom’s excellent readings are enough to keep the attention focused for almost 90 minutes, an impressible accomplishment in a one man show.
Return Journey proves that “death shall have no dominion” over Thomas or his poetry.
Posted by Canberra Critics Circle at 4:45 PM