Lost in Translation's A Steady Rain by Keith Huff

Reviewed by Peter Wilkins at the 2016 Adelaide Fringe 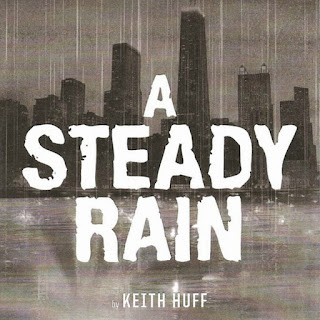 It’s Fringe Time and Adelaide opens her theatres, halls, cafes and alternative venues to the thousands of performers who throng to the city for the annual Fringefest. I am here to review shows at both the Fringe and theAdlaide Festival and after missing a connecting flight from Melbourne, I am still in time to start my journey with A Steady Rain presesented by Lost in Translation , a South Australian company with an enviable reputation for gritty, confronting and thought provoking theatre. Staged in a small curtained off area of a tiny café just off Grenfell Street in the city’s CBD, A Steady Rain is a two hander, written by Keith Ruff and famously performed by Hugh Jackman  and Daniel Craig on Broadway.
Actors Nick Fagan and RoHan Wattsmay not be Jackman and Craig, but their performances are intense, fierce and riveting, holding an audience stunned, enthralled and deeply moved by Ruff’s glimpse of the dangers faced by law enforcers in the seedy, dangerous world of downtown Chicago.
Danny (Fagan) and Joey( Watts ) are partners, two cops pounding the toughest beat in town, peopled by desperate hookers, ruthless pimps and small time crims with big time aspirations, rapists, murderers, dealers and addicts.  Danny is the explosive, hardened bad cop Starsky to Joey’s gentler good cop Hutch. Seated on two chairs and in a narrow performance space only a metre from the audience, Fagan and Watts play out, with remarkable realism, the perilous existence of two cops, desperately trying to maintain law and order. Ruff’s plot, drawn  it would seem from real life accounts and tightly constructed in a series of monologues and duologues tells of an attack on Danny’s family that sparks an enraged vendetta with fearful consequences. Joey attempts to contain his childhood friend’s volatile search for the perpetrators, dismayed by Danny’s affair with a hooker, drug dealing, and willful ignorance of the limits of the law. Danny’s eventual fall, the dreadful doom of a dedicated family man with a fatal flaw, has all the earmarks of a tragic hero. Ruff has opened our eyes to a modern day tragedy, which has startling relevance to our own place and time.
Loyalty, betrayal and duty are blurred and convoluted in this study of human response. Planted evidence, death due to a high speed police chase and corruption are finely balanced by Joey’s moderate attempts to stay within the law and prevent his friend from inevitable consequence. Danny’s dedication to his family and attempts to seek retribution after a drive by shooting lands his baby son in hospital and his wife and children in mortal danger, is both a virtue and a vice, as he reacts as only he knows how- with a lawless lust for veangence. Joey’s love for Connie and his proud sense of law and order offers a clear moral and poignant comment on a cop’s oath of office in spite of the fearful, lawless and violent circumstances that police, like Danny and Joey face every day in the line of duty.
A Steady Rain is an intimately staged powerhouse of a production, directed with vigour and insight by Ben Todd. Only Fagan’s rather indistinct accent at the outset left me briefly bewildered, and I suspect that some vocal warmup would have helped. My ear soon adjusted and both actors held character with gripping authenticity. A performance that could have so easily been played out with Hollywood imitation was handled by the company with genuine regard for the human experience and the individual consequence of impulsive behaviour.
Lost in Translation leaves us with food for thought and a powerful, moving performance that will remain long after I pass through the black curtain into the night outside. 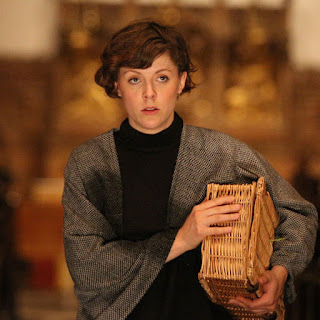 Everything old is new again. Australia’s oldest theatre, the Queens, set back in an alleyway off Adelaide’s Grenfell Street and now stripped back to a cavernous old building that has seen better days is the venue for Flanagan Collective’s satirical sideshow romp, Babylon. I am reminded of the old theatre-in -education days when the collective would sit around, considering a concept for the new show. The Flanagan Collective has decided to stage a participatory performance to expose the absurdities of modern government. An Annual General Meeting has been called to form a new government and appoint a new Head of Government in the personage of a queen to look over the goings on of the Butt Up Party, democratically named by a member of the audience, and swiftly embraced by the squirmy. oily Governing Officer and his party members.
The show claims to be about society, the media and what we stand up for, using cabaret and vaudeville to draw the audience into an hysterically mayhem world of lampoonery and jocular satire. This comical irreverence offers a light hearted glimpse of the serious issues of government, health, education and the monarchy’s role to name but a few of the issues, presented by Joanne Hartstone’s Flanagan Collective in co-production with Greenwich Theatre from the UK.
It’s all well and good, but I found it stylistically passé, relying as it does on hearty, devil may care participation. The very small audience entered helpfully into the spirit of the occasion, but in doing so, the seriousness of the theme appeared to dissolve into didactic outbursts and carelessly managed audience participation. I am sure that a more sizable and enthusiastic audience, fuelled by drinks and savoir faire, would have had a wild ride, and left ready to stage the revolution. I hope that Greenwich Theatre’s actors, all of whom showed energetic performance skills, will be able to rouse larger audiences to support the ideals of the Butt Up party during their Adelaide season.
There were moments of serious contemplation to drive the political message home, and especially by the singer on keyboard. The guitarist’s more mellow, sombre and soulful songs were largely inaudible in the large space, but that may have been my hearing, although I doubt it. Perhaps had he wandered through the audience his songs may have had greater impact.
Babylon is not without merit, but without the tight direction and focused intent that should attend it.