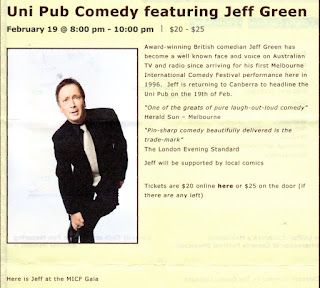 Jeff Geen appeared as the third ‘headline’ act, following Tony Martin and Tom Gleeson (January 15 and January 22), in a Summer Season, to be followed by Andrew Barnett (Civic Pub, March 2), Qintessential: Giggles in the Garden (Sculpture Garden Restaurant, National Gallery of Australia, March 3), Hannah Gadsby (Questacon, March 4 and 5), and Open Mic @ The Front (The Front Gallery and Cafe, March 10), all leading to the Canberra Comedy Festival, Tuesday to Sunday, March 15-20.

Whoever said bureaucratic Canberra, Australia’s Capital City, doesn’t have a heart?  At least it’s got a bellyful of laughs!

Though Jeff Green was billed as the headline last night, the program began with Greg Kimball as an MC who – before, between and after five other performers – proved himself to be as good a raconteur as you could expect from being born and bred in Charnwood.  His stories of family-work life balance, now that he’s breeding the next generation, worked a treat.

In the first half we heard Danny Bensley, Tony Bradford and Franz Kilgore Trout (Riley Bell) to prepare us for the headline event.  As it turned out, though, Jeff Green was seriously challenged as leader of the pack by Canberra’s own (well, he went to ANU for three years) Wil Anderson, who ducked around for a beer after his own show at the Courtyard Studio.

Such is life, but I ended more gripped by Riley Bell’s Franz Kilgore Trout as a truly post-modern artist with political overtones (especially regarding Malcolm Turningbull) and by the differential biceps of Wil Anderson’s sojourn at the gym, than by any of the other three performers.

Although everyone on stage was seriously funny, and the audience was ready to see all the innuendos (sometimes even before the speaker), and so the evening as a whole was entirely enjoyable, I found myself thinking back to my childhood of British BBC comedy, which began with Arthur Askey (look up British Pathe arthur-askey-3 for the Bee Story).

Though many of his jokes were apocryphal, there was a bright energy about him, on film and radio, which was irresistible. Last night it was Bell and Andersen who had that level of energy, and took us each into their particular world of absurdity.  Though it was true that Jeff Green was more accomplished than Bensley and Bradford, there was a degree of predictability, including old-fashioned jokes about the relationship between the sexes, which might easily have pre-dated Arthur Askey.

The interesting thing about the evening, for which I guess David Graham was responsible, was that each half had a dramatic structure.  For me this was a reminder of the next phase of my childhood comedy experience – the Goon Show, in which characters tell us a story, with its up and downs and climactic point – like any good drama.  By selecting the performers for last night’s show in the order of good, better best for each half, the drama of the night was shaped, and the laughter took on the shape to match.  It’s hard to know whether Wil Anderson’s appearance was entirely fortuitous, but he certainly added a great climax to Jeff Green’s ups and downs – including falling off the stage and recovering brilliantly.

If you were there last night, I have no doubt you’ll be itching to get to next month’s Comedy Festival. 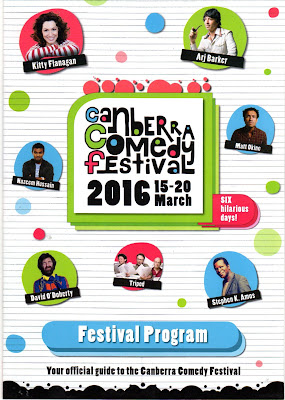