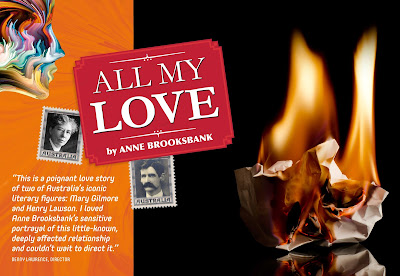 If you knew little about Henry Lawson and Mary Gilmour and looked to Wikipedia for information, you’d find that the only stated connection between them was that Lawson was the greatest influence on Gilmour’s writing.  The content of Anne Brooksbank’s play, ‘All My Love’, is a revelation about the relationship between these two Australian literary icons.  Based on excerpts from the couple’s surviving letters, the play tells the moving story of an intense friendship between Lawson and Gilmour and the life decisions and influence of others that kept them apart.

The play consists of a number of short scenes which tell the couple’s story over many years.  The character of Henry Lawson is most successfully realized but there needs to be more detail about Mary Gilmour and the influences on her writing.

The set design by Jacob Battista is simple and practical and includes slide projections to give a sense of location.  It looks a little overwhelmed on the Q’s large stage and would probably work better in smaller venues.  The atmospheric lighting design, also by Battista, works very well.  Costumes by Sophie Woodward are nicely in period and the sound design by Chris Hubbard and music by composer, Jack Ellis, enhance the sense of location and time.

The two cast members give compelling characterizations.  Dion Mills, as Henry Lawson, gives a great physical and vocal performance as this initially shy, rough young man from the country.  He is particularly impressive as Lawson ages and battles with alcohol addiction.  Kim Denman, as Mary Gilmour, is very appealing as an intelligent woman constrained by the time she lived in.  Their later scenes in the play where they still have passion for each other but cannot be together are very touching.

Director, Denny Lawrence, has done a fine job keeping the show moving swiftly from scene to scene and has obtained a nice depth of characterization from his actors.

‘All My Love’ is an absorbing drama that gives a strong feeling of an earlier time in our country’s history.  The story of these two fascinating Australians is very moving.

Len Power’s reviews can also be heard on ‘Artcetera’ on Artsound FM 92.7 from 9am on Saturdays.
Posted by Canberra Critics Circle at 11:14 AM