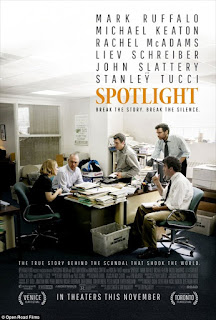 Just before 9/11, the Boston Globe was about to publish revelations of long-term and systematic child sexual abuse by rogue priests in the Catholic Church. The story was eventually published in 2002 and the newspaper's investigative work honoured with a Pulitzer Prize. The impact of the revelations still continues today, and it makes Spotlight a timely reminder of the importance of tough, investigative—and old-fashioned—journalism as we revisit it today.

What was the Church in Massachusetts doing to stem the abuse that was perpetrated for decades by a small but significant percentage of its priests? Did it say it was working to address ‘unacceptable’ behaviour? Not even that. It was reshuffling the deck and moving priests on to other dioceses, as it did here in Australia and other countries around the world.

A cracking screenplay by West Wing writer Josh Singer and a very talented cast including Mark Ruffalo, Rachel McAdams, Michael Keaton and Liev Schreiber makes for a rivetting drama. The director and co-writer Tom McCarthy, who has some low-key, sensitive adult films like The Station Agent and The Visitor to his name, has managed to handle this highly combustible material deftly and still keep the drama extraordinarily immediate and real. I guarantee you will feel dismayed, angry and outraged.

We already know about the abuse, but the extent to which other institutions cooperated with the Church is the important point here. Few if any in the city establishment classes appeared willing to upset the applecart.

It took a new editor at the Globe, Marty Baron (Schreiber) to get things rolling. He arrived alone and his last known address was Florida. It just so happened that he was Jewish and he asked the question that no one else seemed able to. Being an outlier brought both advantage and disadvantage, however. Not being a Boston native, he could see things for what they were and name them with impunity, no love lost. But his outsider status could also be used against him. Keep an eye out for the machinations of city elite.

The question the film asks is how can serious crimes against children remain undetected year upon year? The pattern the journalists found explains. The victims were selected because they were perceived unlikely to tell on anyone. If they were socially disadvantaged they were fair game. If they came from single parent families, were emotionally vulnerable  and likely to be overwhelmed even by the unwanted attention of a man of god, they were fair game. Spotlight is, you might say, a creepy experience.

Using cool judgement, director McCarthy keeps the mood calm, balanced and very low key. Spotlight is a powerful statement on one of the most terrible crimes of the last century.

Alex Gibney's brilliant documentary about child abuse in the Catholic Church, Mea Maxima Culpa: Silence in the House of God in 2012, was another fine film on these issues. It never got hysterical either. A brief moment in Spotlight when Ruffalo’s tenacious journalist Mike Rezendes loses it in righteous anger, somehow gives expression to what we feel and want to express. The actor has made interesting perceptive comment about Spotlight in a recent Guardian interview.

The church hierarchy had, as we now know, been putting priest perpetrators on ‘sick leave’, hiding them away ‘unassigned’, and eventually moving them on to other dioceses where the abuse began all over again. Lawyers who they hired to assist with victim compensation—a meagre $20,000—obliged by keeping no records. And the Globe itself passed up on the story when it first arose, though it got it right in the end.