THE LAST TIME: A Story of Love, Lust and Desperation


The Last Time : A Story of Love, Lust and Desperation 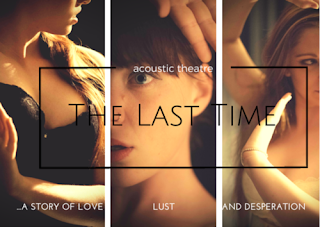 If you did not see The Last Time this time then make sure that you don’t miss it next time, and there should be a next time for the newly formed and extremely talented Acoustic Theatre’s  gritty, sexy, feisty musical of today’s youth and their struggle for love, security, identity and acceptance. If Canberra were New York, then this would be a sure-fire Off-off Broadway hit with a certain trajectory to the bigger stage. There are several reasons for this. One is the intimacy of the performance space in the Belconnen Arts centre Dance Studio. With audience seated in the round, a five piece band in one corner and four performers on stage within a metre of the audience. Occasionally the white faced lead guitarist (Samuel Gordon Bruce) makes an entrance as a Cabaret Club Emcee aka The Music Man. The other is the amazing talent of the four key performers. The irony of miking members of a company called Acoustic Theatre is inescapable, but it lends sheer force to Frances McNair’s gutsy, raunchy voice, Kat Bramston’s soaring soprano with its silver-lined high notes, Katherine Berry’s soulful sounds from the heart and Hayden Crosweller’s resonant and contrasting male vocals.
The Last Time is pure Ensemble in action. There is no narrative plot to speak of, but rather vignettes of intertwined relationships. Caroline (Kat Branston) tumbles from one bed to another in search of love. Christopher (Hayden Crosweller with touches of elasticized Jerry Lewis) desires Caroline but can’t resist his lustful testosterone charged appetite. Ellie (Frances McNair) craves a steady lesbian relationship which she longs for with the vulnerable and secretive Valerie (Katherine Berry) This labyrinth of desire and frustration, suffocating control and freewheeling abandonment, fuelled by tequila and highs claws at the erupting conflicts between characters as they desperately search for an antidote to the torment of their unanchored desire. The Last Time holds the mirror up to a time when spinning out of control is a station on the rite of passage. Audience sit as voyeurs to the action, confronted by a life they recognize, a past they remember or perhaps a future they can already see. The production is a tightly woven mesh of absorbing theatricality. At time it is absurdly comical, at other times, heavy laden with pathos and sometimes simply a reflection of an experience that will pass, and yet, for the present appears the summation of life’s true agony. This is their song of experience, and for that reason alone it is an important new and original work from a team of talented and entertaining creatives.


Co-director and writer/composer Lucy Matthews with her co director and choreographer Miriam Slater have crafted a work of Real expressionism. Every scene echoes with the ring of truth. Nights before and mornings after, clubs and bus stops, interrupted by the ever present mobile calls and texts are the cultural signposts of the actors’ generation. Lucy Matthews’ writing is raw and honest. The actors’ performances recall the intensity of Lee Strasberg’s Actor’s Studio.


This is evocatively underpinned by the four members of the band, Brodie Heidtmann on guitar, Brent Brosnan on Drums, Reid Workman on Guitar and Luke Tompsett. Their arrangements are recognizable from Sondheim to Ebb and Kantor, but refreshingly original, and lending atmosphere to the turmoil and confusion of the whirling passions and lives of the characters. Edge Lighting heightens atmosphere with moody colours and angular lighting to cast shadows across the challenging Theatre in the Round. With two acts, interrupted by an interval, the musical is perhaps too long, but that does not take away the professional care taken by this company in all aspects of production.


At one stage, The Music Man jibes the self-possessed antics of the characters, and most specifically Caroline in a stroke of Brechtian alienation. “Does anyone really care?” he asks the audience. There is no reply. Perhaps in Bertolt Brecht’s Ensemble Theatre, an audience member may have called out in authoritative German.., “Yes I do!” But that is not the issue. Brecht asked audiences to judge, to seek solutions, to empower people against oppressions, personal and public. We are not meant to care, although it is inevitable that we may wish resolution to these characters’ desperate turmoil in love and lust and desire. The Music Man’s incantation is provocative, and it is the duty of a generation that has passed through this confusing rite of passage to judge, but not pass judgement, to change, but not condemn, to accept, but not deny. It may not be the last time for these characters to pass this way, but it could be a step towards the first time to carry experience through to the next time.

Acoustic Theatre have made an impressive and entertaining entrance upon the Canberra stage with a production that deserves a journey towards future success. This is a company that lends a voice to its generation and a theatrical tour de force for all generations.


Whether theatre in the round is the most ideal performance space for a show that needs to connect directly with every member of the audience is a matter for debate. The Last Time deals with important issues in an attempt to resolve many of the conflicts and dilemmas of its generation and too often audience members are excluded from a performer’s total character. Intimacy is great. Exclusion can be too alienating.


Finally, this dynamic new work already has the potential to tour to other venues and Fringe festivals or cabaret festivals. It is a great ambassador for young Canberra talent with a show that has a lot to say in a thoughtful, consciousness raising way. Hopefully it will not be the last time for audiences to see Acoustic Theatre’s ground-breaking alternative musical.