UNSEEN - A Tribute to Marni Nixon 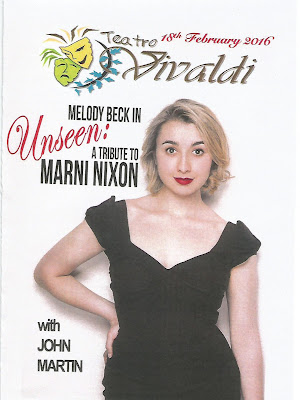 If you’ve never heard of Marni Nixon don’t be too hard on yourself. Marni Nixon made a career out of being anonymous. She was one of a small group of singers, known as voice ghosts, who worked in Hollywood during the heyday of Hollywood musicals, providing voices for film stars whose own vocal equipment didn’t make the grade.

Sydney based singer, Melody Beck, became so fascinated with Marni Nixon’s story that she wrote a cabaret about her, which she’s performed at cabaret festivals around Australia, and even once in New York where she performed it in front of the real Marni Nixon.

Last Friday night Melody performed her cabaret at Teatro Vivaldi’s in front of a celebrity audience which included Simon Gallaher, Michael Cormick, John Wood and Normie Rowe, all in town for the annual CAT Awards the following night.

Dressed in a smart black cocktail dress, and without the aid of any props, Melody assumed the character of Marnie Nixon, and spoke in the first person to tell her story. If the real Marnie Nixon is anything like the character Beck portrayed then she is a charming storyteller perfectly capable of keeping her audience totally enthralled as she shares her extraordinary story.

In telling the stories about the making of the movies for which she provided her unique talent, among liberal sprinklings of songs from those movies, Nixon provides uncannily accurate demonstrations of the voices of her famous clients, not only as we know them from the films in which they appeared, but their real voices - Natalie Wood’s for “West Side Story”, Deborah Kerr’s for “The King and I”, Audrey Hepburn’s for “My Fair Lady”.  “I dubbed their voices but they dubbed my face” she explains.

Nixon even dubbed the voices of the three cockney geese in “Mary Poppins”. She confides that she did appear in one film under her own name. She played Sister Sophia in the Julie Andrews film “The Sound of Music”.

Later in her career after it was made public that the studios were using voice ghosts to enhance the voices of their stars, Nixon enjoyed a career on the Las Vegas circuit, even working with Liberace, whom she described as “a one-man Disneyland”.

She even includes samples of the work of other voice ghosts and so the voices of Margaret O’Brien, Debbie Reynolds, Rita Hayworth, Jeanne Crain and Ida Lupino, both real and dubbed, are featured in the show.

Nixon shares the information that during the making of the film of “West Side Story” at one point she provided the voices of both Natalie Wood and Rita Moreno, and demonstrated hilariously by singing “Tonight” as a duet using the voices of both actresses.

As she demonstrated in her encore, Melody Beck herself possesses a crystal clear, classically trained soprano voice. She shares with Marni Nixon, a keen ear and remarkable vocal flexibility which allows her to mimic and reproduce the idiosyncrasies of particular voices, in this case, very famous voices.

She has harnessed this talent to create an impressively researched, stylishly performed and delightfully entertaining cabaret, for which she was masterfully accompanied at the piano by John Martin.
This review also appears in Australian Arts Review .. www.artsreview.com.au