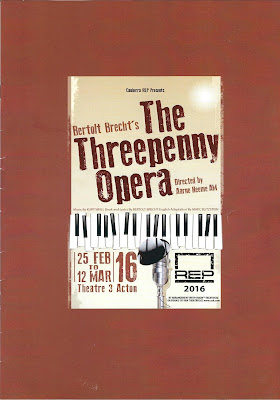 Most theatre-goers would know of ‘The Threepenny Opera’ but not many would have had the opportunity to see it staged.  Aarne Neeme’s excellent production for Canberra REP is a must see.

Adapted from ‘The Beggar’s Opera’, written in 1728 by John Gay, the show presents a simple story of a battle between two groups of petty criminals, brought to a head by the elopement of the daughter of the leader of one group to the leader of the other group.  ‘The Threepenny Opera’ was first staged in Germany in 1928.

In his adaptation, Bertolt Brecht used the themes of Gay’s work to comment on and satirise exploitation, society, pretentiousness, class and personal values and even theatre audience expectations.  Kurt Weill’s music is a perfect accompaniment to the script.  Rather than an expected emotional continuation of a scene musically, the songs also comment on and criticize the action and the characters themselves.

The play is presented on a daringly bare stage with minimal set decoration, cleverly designed by Quentin Mitchell.  There is a hint of German Expressionism in the characters’ makeup (well-designed by Peggy Carter), the painted floor designs, the distorted set pieces and the excellent shadowy lighting by Stephen Still.  Anna Senior’s costumes add immensely to the raffish atmosphere of the show.  Musical direction of this unusual score by Ewan is superb and is played very well by his band of 11 players.

The large cast of 19 all perform and sing this complex show very well.  Dick Goldberg as the Street Singer sets the scene and sings a memorable ‘Ballad Of Mack The Knife’.  Tim Sekuless gives a very good performance as the criminal Macheath.  His third act songs are especially well sung.  Peter Dark gives a strong characterisation as Peachum, the criminal king of the beggars, and is in fine voice with ‘Morning Anthem’ and ‘Useless Song’.  Playing his wife, Sarahlouise Owens is tough and formidable and her ‘Ballad Of Dependency’ was particularly memorable.

Tina Robinson gives an appealing performance as Polly Peachum.  Her song, ‘Pirate Jenny’, has been recorded by many famous singers and she delivers a stand out rendition of it in this show.  Playing Polly’s rival for Macheath’s affections, Sian Harrington sings a great ‘Barbara Song’ and Helen MacFarlane gives a striking characterisation as the prostitute, Jenny.  Her ‘Tango Ballad’ with Macheath and solo ‘Solomon Song’ were amongst the highlights of the show.  Jim Adamik scores as Tiger Brown, the corrupt Chief of Police, and is delightful singing ‘Army Song’ with Macheath and the gang members.

Aarne Neeme has produced a definitive version of this show.  Don’t miss it!

Len Power’s reviews can also be heard on ‘Artcetera’ on Artsound FM 92.7 from 9am on Saturdays.