THE DESIGNER: Decorator or Dramaturg? by Stephen Curtis 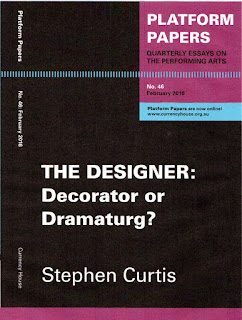 ADELAIDE: Launch of THE DESIGNER by playwright Andrew Bovell (Secret River), with Stephen Curtis in conversation with scholar/director Julian Meyrick. When: 6pm, Tuesday 23 February 2016 Where: State Library of South Australia, North Terrace All welcome. Free. Essential to book on info@currencyhouse.org.au

A pdf of Currency House’s Platform Paper 46 available on media request: media enquiries to Martin Portus at mportus@optusnet.com.au
Available for sale at www.currencyhouse.org.au or in bookshops from 1 February.

Having read Stephen Curtis’ Paper, it’s an enormous disappointment that I am unable to be present at the launch in Sydney next Monday.  His Paper is at once thoroughly erudite and highly engaging.  His relationship with director Neil Armfield while working on The Secret River (now in its second run at Sydney Theatre Company, Roslyn Packer Theatre until February 20) forms a fascinating case study in Chapter 8: A Designer at Work.  To see them together would complete the theme of the written words: “When people see the design they can see what the production is going to be.”

When I look back to my review of the first run of The Secret River (which I saw at the Canberra Playhouse, February 14-17, 2013), I am now thoroughly ashamed to note that I did not make any reference to the set or costume design, or even name the designers.  Curtis’ conclusion summarises my failure.  I wrote about “the pen of Andrew Bovell and the directing of Neil Armfield”, and how “The casting is excellent throughout, but I have to say that Ursula Yovich was quite extraordinary in her role of narrator, and her singing at the very end drove the tragic feeling into our very souls.”  But nothing about the stage design which is essential to creating the right theatrical space for me to have that experience.

Curtis writes: Our practice today is a synthesis of the design legacy of our last century of Australian design.  Today and beyond, the mercurial designer brings together all aspects of our role: as artisan and technician in command of our craft; designer as artist with the expressive power to communicate; occasionally designer as auteur with the vision to command; designer as accomplished and professional image-maker who knows how to keep a hundred balls in the air and get the show on; designer as experimenter testing new ways of connecting with our audience; designer as manager holding together the fine detail and the big picture; designer as dramaturg interrogating meaning, and yes, as ‘decorator’ orchestrating the aesthetic values of the production; and as collaborator and ‘wicked‘ theatre-maker. The designer is all of these.See what we do. We are here to help spark that awakening.

I was, of course, warned early in the Paper’s Introduction: "An overview of contemporary Australian theatre writing in newspapers, blogs, radio interviews and journals reveals how little our arts journalists see. While now the design will usually be mentioned, it is almost always in terms of aesthetics; only occasionally will it be discussed in terms of how it works, even less often in terms of how it feels, and rarely if ever in terms of how it contributes to the production’s meaning."


So, suitably castigated, I followed Curtis’ story through

1: The Evolution Of The Designer: From Decorator To Dramaturg?
“No, this Platform Paper is not a whinge about how bad things are for Australian performance designers.  Our position—as costume and set designers, lighting and sound designers—is on the whole a good-news story....”

2: Design Experimentation
“In contemporary theatre practice this disdain for aesthetic, ‘decorative’ values, if not universally held, is deeply entrenched....”

3: The Artist-Designer
“The next era of Australian theatre and design—from the 1920s to the 1950s—is fascinating: three decades and three waves of revolutionary theatre thinking brought to Australia by theatre-makers returning from abroad and post-war refugees emigrating from Eastern Europe [who] broke the hegemony of the big commercial producers to make room for home-grown theatrical talent. These were the ground breakers, the artist-designers....”

4: The Standardbearers: The Professional Designer
“It was up to the next wave of designers, from the 1950s through to the last decades of the last century to bring a new coherence of conception to the Australian stage....”

5: The Dream, Not The Drawing Room
“The designers of this next wave in the early 1970s were the iconoclasts, rejecting the realist orthodoxy and all of its values of descriptive, literal design....”

6: The Collaborators
“Design was driven conceptually, fired by an unequivocal desire to communicate to the audience the ideas of the production and its very particular interpretation. It was design as grand metaphor.... With theatre reverberating with all this change it was the next wave of designers, of which I was part—the designercollaborators— that was to make collaboration the centre of our practice....”

7: The Next Wave
“The role of the designer has become increasingly more professional and disciplined in contemporary theatre practice. And discipline is the operative word: directors, performers, producers and our audience can rely on their designer....”

8: A Designer At Work
“There is no template in designing. But there is a process, and as an insight into our dramaturgical role and how designers work I would like to share part of my process as set designer on the Sydney Theatre Company’s The Secret River....”

9: Design Value
“The whole design process—from first meeting to opening night on a production of the scale of The Secret River would typically take a set or costume designer twelve to fourteen weeks fulltime, or a designer responsible for both costumes and sets seventeen to twenty weeks....”

And so now I have absolutely no excuse.  Stephen Curtis has given us critics plenty of material from historical and current practice to be able to see a production as well as watch it, and to look for the elements in design which we think suit or fail to suit the nature of the play.

In my own defence, I can give an example.  I wrote of Sydney Theatre Company’s recent King Lear: “Being mythic does not imply that the setting must be in an ancient past, nor limited to any time or place.  [Set Designer] Robert Cousins has understood this so well that clothing may be modern, words may be amplified with modern technology, nakedness may be explicit as it can at last be on a modern stage, rain may be real water, swords may be no more than short knives; and all may be presented for the first half in black empty space foreboding awful things to come, yet turn white in an even more frightening open space than before.  Every element in costumes, props, becomes significant and imbued with meaning in a weird way.  Every detail stands out in our minds because there are no boundaries which allow us to sit back satisfied.”

Even so, when I spoke to musician and author Peter Best, the brilliant stage and film composer, in the foyer following his Goldilocks and the Three Bears, he had quite definitely disliked the design and stylistic intention of King Lear.  Where the ‘empty space’ (Curtis makes a point of clarifying what Peter Brook actually meant) made me feel for Lear, however foolish, and made me see what Shakespeare meant in writing the play, Best found himself coldly cut out of empathetic feeling.  I think he saw the design as having taken over the production, becoming a visual end in itself, creating no more than an intellectual idea about the play.

The importance of Stephen Curtis’ essay is not that we should all learn to love stage designers, but that by coming to understand the complexity and diversity of approaches in our Australian tradition, we are given a new breadth of language to use in our criticisms.  This is why I am more than glad to have read Platform Paper 46, and why I am very disappointed that I will not be there to witness the long-term collaborators – director Neil Armfield and designer Stephen Curtis – in action in Sydney on February 15 (nor indeed the author/adaptor Andrew Bovell with Curtis in Adelaide on February 23).

If you are able, please book with Currency House at info@currencyhouse.org.au – and write your comments here as you see fit.


Posted by Canberra Critics Circle at 12:06 AM