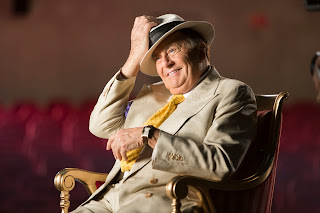 
Who better than Australia’s dissipated champion of cultural cringe, Sir Les Pattison, to host a final night concert of the Barry Humphries Adelaide Cabaret Festival. This crass, uncultured, debauched, degenerate and disgustingly crude relic of the nation’s sorry state of the arts with his spraying spittle, colossal crotch and bulbous red visage remains forever etched in the memory as one of Barry Humphries most unforgettable, if for some most detestable characters. For the packed audience of the Festival at this one-off farewell to three weeks of scintillating no rules cabaret offered a tasty degustation of talent, including the amazing Ali McGregor, who introduces the audience to her sidewalk of lost souls and lovers and losers. Sir Les, accompanied by his scantily clad Lesettes, dishes the muck with his rhyming expletive that Humphries claimed would not see the light of cabaret at his festival. But then he was leaving the following day so why give a….. 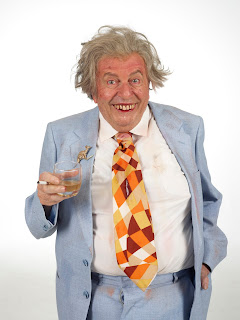 Barry Humphries as Sir Les Pattison
For those who have followed the despicable antics of the master of satire’s most vulgar creation over the decades, there is little surprise and abundant delight in the metaphors that he heaps upon his delighted admirers. And, judging by the uproarious laughter, the theatre was full of adoring fans. Humphries’ talent has always been to hold the mirror up to the unwitting victims of his sharp satirical bite and allow them to laugh at themselves, to delight in the innuendo and to see others as they do not see themselves. With rapier wit, harmless insult and groundling grossness, Sir Les lets the crude quip slip from the lip as he tells his audience that he is” off to Bangkok to get his rocket polished. His frontal insult attack is swiftly launched at an unsuspecting lady in the front row, “You’ve got a face like a half sucked mango”.
Sir Les only makes a handful of short appearances, leaving the stage to the talents of the likes of McGregor, Amelia Ryan, The Songbirds, Trevor Ashley, Lady Rizo, all backed by the Adelaide Art Orchestra. With a parting cliché Pattison offers a stereotypical view of the arts sung in guttural contempt, There’s a Lot Of Poofters In The Arts!
Set against a plush bordello design upon the vast Festival Theatre stage, Love Songs For Sir Les offers a pot pourri sample of festival highlights, mostly from the final week of what has been hailed as the most successful Cabaret Festival yet. The final concert is a tribute to the many local, national and international artists who have illuminated the many guises of cabaret within the Festival Centre precinct. The talent is palpable in the one-off farewell event and it would be remiss of me to apply the same criteria of quality to the production. Under the direction of Andy packer, it has obviously been hurriedly put together. With so many busy artists involved in their own shows, and Humphries offering his own performances as dame Edna and Sir Les as well as playing mine host to the weeks of non-stop entertainment, the best that packer could hope for I that he marshals the artists and ensures the smooth transition from act to act. For the audience it is a showcase smorgasbord of talent and a feat of fun entertainment and a fitting finale to a jewel in the city’s festivals crown. 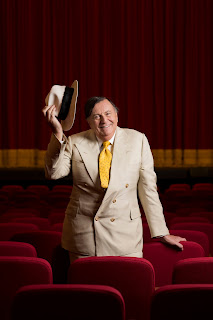 Barry Humphries waves goodbye to his festival
The octogenarian monarch of satirical entertainment and the star-bright artistic director of the 2015 Adelaide Cabaret Festival offers his final bow and has handed the baton to two of cabarets brightest stars, Ali McGregor and Eddie Perfect to take on the mantle in 2016. Young, enthusiastic, experienced and bursting with talent, they promise excitement, energy and a dynamic programme of events for the 2016 Adelaide Cabaret Festival, and a worthy successor to this year’s phenomenal celebration of cabaret under Barry Humphries and his team. Mark June 10-25 in your calendar  as your 2016 Adelaide Cabaret Festival experience. By order of none other than your cultural Czar, the Right Honourable Sir Les Pattison!.