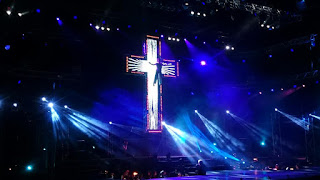 Everything’s alright, yes, everything’s fine:
Grand finalist from The Voice and one of the Ten Tenors to play Jesus – check
Michael Falzon in the role of Judas – check
Ginormous, neon, flashing Cross – check
Jesus suspended two storeys off the stage – check
Enough heating to silence even the grumbliest of cold Canberrans – check.

Staging a show at the AIS Arena, one may worry that the production will lack atmosphere or rich, full sound, or lighting and staging dramatic enough to fill the cavernous space, especially when not packed to the rafters. However, this production of Jesus Christ Superstar, produced by the newly formed PeeWee Productions, and with Stephen Pike directing, has managed to overcome these hurdles.

Jesus is portrayed (blonde and youthfully clean-cut) by Luke Kennedy, who gives an understated and controlled performance. Pike’s direction has several of the leads perform solos with relatively little movement and drama, which firmly plants the attention on the singing and production elements.

In Kennedy’s case, this reaches a crescendo in 'Gethsemane', where his incredible vocal range and beautiful timbre is starkly on display. By the time he hits tenor top C the wow factor has definitely set in.

Opposite Kennedy’s Jesus, Michael Falzon gives an intense performance as Judas, tortured and unpredictable (to all but Jesus). Falzon’s singing was strong, assured and rich and his dramatic, slightly maniacal interpretation of the role built the suspense before his dramatic demise.

Jenna Roberts, a local performer becoming well established as a leading actress and singer, gives Mary Magdalene a clean-cut twist, delivering her solos with a pretty vibrato and bringing empathy and vulnerability to the role. Her duet ‘Could we start again please?’ was beautifully sung and staged, complimented by the smooth, warm voice of Nick Valois as the repentant Peter. It was quite poignant and one of the highlights of the evening.

Max Gambale’s ‘Pilate’s Dream’ was definitely another and startlingly beautiful. It took a glimpse at the programme to discover he’s a local with a job at Questacon and studying physics, not a full time singer!

Another stand-out was Will Huang, whose assured, albeit brief solos and stage presence in the role of Simon Zealotes, impressed.

There were a few minor pitch issues here and there in some solos and on occasion the timing between the singers and the orchestra at the end of numbers, was a fraction out. Not enough to detract significantly from the show.

‘Hosanna’ and ‘Heal me’ were highlight ensemble numbers, both vocally and choreographically - the latter staged to great effect.

The choreographic challenge is to take what was created as a rock opera, written in a psychedelic, hippie genre, performed primarily in Roman, biblical garb and make it cohesive, or to modernize it. Jordan Kelly’s energetic choreography succeeded in this, for the most part, utilizing the multi-level stage well. In patches though, the choreography was too sharp and precisely executed for the looser, hippie origins of Jesus Christ Superstar, so it came across as juxtaposed with the lyrics and genre.

The costumes had an impressive palette of both muted and regal colours. The High Priests looked like Intergalactic beings, imposing, with rubber smocks and blue mohawks. Jesus’ sneakers and Mary’s ballet flats seemed incongruous.

It was a strong ensemble performance all round both physically and vocally but toward the end of the show, the dramatic tension that had been building was broken by the ensemble’s change into stock-standard black pants and coloured t-shirts, and the choreography of the title song.

Musical Director Ian McLean, who was instrumental (pardon the pun) in getting the production staged, has updated the score considerably, to great effect, and when the first orchestral notes of ‘Jesus Christ Superstar’ fill the arena, it’s a goosebumps moment. Chris Neal has ensured good sound balance between the performers and the orchestra.

It’s an impressive light show by Phil Goodwin, notably so in the Garden of Gethsemane sequence, and culminating in the full kitsch, flashy crucifixion scene.

A really well rounded show and a very engrossing night at the arena!

So. That’s the buzz – that’s what’s a-happening…
Posted by Canberra Critics Circle at 5:50 AM