Drag performer Trevor Ashley ends my Cabaret Festival experience on an energy-charged, outrageously camp high. Coming from his brief appearance in the festival’s farewell performance of Love Songs For Les, Ashley bursts onto the stage of The Space with the explosive charisma of the divas he impersonates. “It’s been a frigging week” he announces to his crowded audience, and it shows in the strained vocal chords that are bearing the brunt of a performance without compromise.
Ashley is no apologist; nor does he need to be. The voice may be gravelling its way through the songs, but nothing in this amazing artist’s performance will sacrifice Ashley’s stunning transformation into the divas of song.  With the panache of a chameleon impersonator, Ashley blasts his way through song after song of  the likes of Bette Midler: “the drag queen trapped in a woman’s body”, Cher: Judy Garland in a duet with daughter Liza Minelli: Tina Turner, that raunchy tigress of rock,  and that grand dame of the billowing gowns, Shirley Bassey. 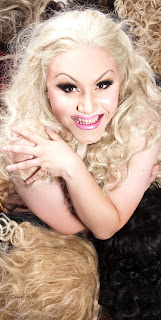 With relentless force, wig after wig is discarded into a bin while a new one is donned to bring to life another perfectly realized chanteuse. Costumes are changed in view and in an instant the transformation is complete. And the familiar numbers keep coming, backed by a band that enters the spirit of the show with relish and gusto. Ashley  intersperses his dresser’s costume changes with banter, and a wind machine sequence with an audience member holding the fan as Ashley bursts into Bonnie Tyler’s Total Eclipse of The Heart. Bette Midler’s From A Distance morphs effortlessly into The Rose. Shirley Bassey’s voice swells through The Space with Bart’s As Long As He Needs Me from Oliver and the diva’s signature song, Diamonds Are Forever.
The divine and occasionally decadent, but always dynamic divas of Ashley’s kaleidoscopic repertoire could not hope for a better tribute. In spite of the toll of his frigging week, Ashley’s never-let-up parade of legendary singers captures the very essence of his impersonations. I’m Every Woman is more than impersonation in song. It is a revelation of remarkable talent and forceful personalities. With a wig, make-up and  a gown or flimsy costume to reveal his stars of song and stage and screen, Ashley reveals his consummate skill and devotion to the divas that have lit up our lives through their song.
His encore appearance as Susan Boyle is more than a comical jibe at this unusual phenomenon. The master of drag who can transform into the mistress of song reminds us with empathetic  sensitivity that even the ugly duckling can become a swan of song and “dream a dream that life can be far better than the one I’m living” .
What a wonderful way to end my visit to Barry Humphries’ Adelaide Cabaret Festiva!.  The choice to include Ashley’s I’m Every Woman” in the final week would do Dame Edna proud!
Posted by Canberra Critics Circle at 12:09 PM