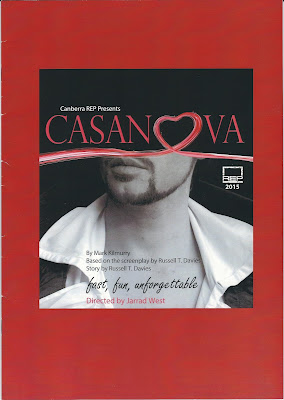 Written by Mark Kilmurry
Based on the screenplay by Russell T. Davies
Directed by Jarrad West
Canberra REP, Theatre 3 until 4 July.

You wouldn’t want to see a play about legendary lover, Casanova, unless it was really sexy.  Well, in Canberra REP’s new production there’s more sex happening onstage than you can shake a stick at.

Jarrad West’s fast-moving, furiously funny production has a wild ensemble of actors performing the life of Casanova as related to a maid by the elder Casanova, played movingly by Tony Turner.  With hints of Commedia del’Arte and a jumble of various styles mixed with modern and classical music, it’s daring and it works.

Using the revolving stage, the delightfully busy setting, designed by the director, provides a multitude of locations.  Lighting by Kelly McGannon and sound by the director were complex, impressive and well-executed.  Costumes designed by Anne Kay were colourful, quirky and fun.

Ben Russell, who plays the younger Casanova, commands the stage with a charismatic, edgy and believable performance.  Steph Roberts as Edith, the maid attending the elder Casanova, projects a nicely realistic warmth and concern for the old man.  Amy Dunham as Henriette, the love of Casanova’s life, displays great vulnerability and a moving sense of the damage the relationship caused her.  Riley Bell, as the younger Casanova’s best friend, and Chris Zuber, as Casanova’s nemesis, also give strong performances.  The rest of the cast play multiple roles and there is stunningly vivid character work from everyone.

Jarrad West’s vision for this play was risky and he took some big chances.  The result is a sexy and highly entertaining night of good theatre.