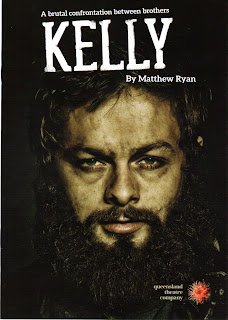 This variation on the myth of Ned Kelly is an interesting delve into what may have been the relationship between the gang leader Ned and his young brother Dan.  At one level, Matthew Ryan’s ideas about their characters may explain some of the mysteries in the Kelly story, such as the propensity of Dan and Steve Hart to disguise Steve as a woman, and whether Dan was as committed as his brother claimed to be as a revolutionary on behalf of the downtrodden.

But beyond this particular story, the play raises questions about violence and extreme destructive behaviour which we see played out in different ways around the world, including here in Australia today.

First, though, to the quality of the production.

The set design, representing the Old Melbourne Gaol in 1880, is not a literal reproduction of the cell where Kelly was held.  The play is not a historical documentary.  So the stage floor is an open space with an unadorned bed in the centre; upstage across the whole width is a raised iron walkway, with a narrow iron stairway down at stage left.  The only entrances are at the left and right ends of the walkway.

This simple design places the prisoner at the mercy of the guard, while the clanging of boot and baton on iron steps and rails is all we need to imagine ourselves incarcerated – though at one point we are made aware of the imaginary ‘fourth wall’ between us and them.  Dan looks out at us, but turns and says to his demanding imaginative brother, “I can see a wall, only.”

Surrounding all is highly evocative sound concrête: hard to describe in words but perfect for locating the drama in our feelings.

Between the actors – Steven Rooke as Ned, Kevin Spink as Dan and Anthony Standish as Guard – there is a strong sense of choreography: of the interplay between them in movement and speech.  They play as if in a dance of changing positions – of power and weakness; of winning and losing.

We are aware that we are watching a play, a theatrical construct, and so we have no problem with Ned making Dan act out events in their violent story (though Dan intensely dislikes having to do so); or even with the Guard briefly becoming a character in their story, then switching into his Guard role.

For me, this approach made the work engaging, and I began to wonder if I should not see the play as a fantasy entirely in Ned’s head as he faces the reality of his execution, just hours away – indeed only minutes away as the play ends.  Rather than my having to believe in the theory that Dan survived the fire at Glenrowan, or the obviously fictional story of his meeting Ned in the guise of a priest, I could just as easily see the priest as ‘real’ – since a priest brought in to prepare a person to face his death was the usual thing in the days of capital punishment.  Ned might imagine him to be his ‘baby’ brother as he goes through the question of his own guilt in causing Dan’s death.

It’s at this point that I come to the broader ramifications of the Ned Kelly story.  Why do certain people turn to cause such chaos and destruction of others, often in the belief that they are creating a better world.  From the leaders of IS in Iraq and Syria, to the Bonds and Skases, or George Alex and his series of phoenix labour hire companies, and even to Dylann Roof’s racist killings in South Carolina, can we come to some understanding of how they do what they do?  Why do these people become mythic in stature, as if other lesser mortals admire them even while they revile them?

I think Ned Kelly has this status because people like him arise generation after generation.  And this play allows us to accept his desire to defend his family, protect his brother and rescue his sister – especially in a society where violence is normal (including the killing of people convicted of crimes, by the state) and where weapons are commonly available (such as in the US, where Dylann Roof’s father could buy him a pistol for his 21st birthday) – and that these morally good intentions can lead to massive evils.  We hear politicians call such people ‘evil’, ‘inhuman’, and we shake our heads as we say we can’t understand them.  But they are human, they do evil things, and perhaps, like Matthew Ryan’s idea of Ned Kelly, they want to control their world – and therefore the world – to make everything right.

Kelly, then, is worth watching for both its production quality and for stimulating such thinking.

Posted by Canberra Critics Circle at 11:12 AM