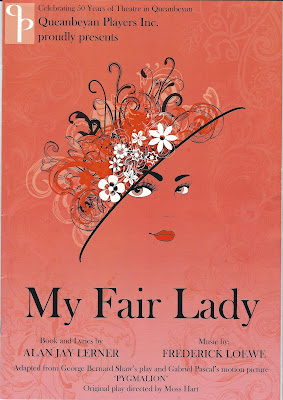 For many years, ‘My Fair Lady’, based on Bernard Shaw’s ‘Pygmalion’, was the longest running musical ever on Broadway until overtaken by shows such as ‘The Phantom of the Opera’ and ‘Les Miserables’.  Queanbeyan Players have done a splendid job with their new production of the show.

Janet Tweedie, the director, has wisely kept the production simple.  Numerous scene changes are required, but set designer, Thompson Quan Wing, has cleverly produced scenery that suggests locations and lets our imaginations do the rest.  The choreography by Belinda Hassall suits the skill levels of the performers and the moves are just right for the lower class characters.  Janetta McRae has excelled with her designs for the eye-catching period costumes and milliners, Tina Robinson and Kerry Kemp, produced some great hats for the women.

The four main leads do extremely well.  Tina Robinson as Eliza Doolittle gives a great all-round performance as the rough-talking cockney flower girl who is transformed into a lady.  Her singing of ‘Just You Wait’ and ‘I Could Have Danced All Night’ were highlights of the production.

Gerard Ninnes plays Henry Higgins with the right amount of amusing arrogance and self-delusion.  He sings very well but the decision to sing Higgins’ songs, rather than ‘talk-sing’ them as originally written, lessens their effect.  Sustaining the notes seems out of character with Higgins’ preciseness and drains some of the energy from his songs.

Peter Dark was superb as the elderly Colonel Pickering.  He captured the upper class manners of the period perfectly and his comic timing was excellent.  His song, ‘You Did It’, gave Peter the opportunity to display his fine singing voice.  Robert Grice gave one of his best performances as the crusty Alfred P. Doolittle.

There was excellent support from Charles Hudson as a nicely judged Freddy Eynsford Hill with his song, ‘On the Street Where You Live’ and Micki Beckett was delightfully amusing as Mrs. Higgins.  Amanda Stewart as the long-suffering housekeeper, Mrs Pearce, and Doreen Robinson as socialite matron, Mrs Eynsford-Hill, also gave strong performances.

It was good to see the use of body mikes on this show.  The sound was clear and well-balanced between singers and orchestra.  Emma White, the vocal director, has achieved a high quality with all of the singers and musical direction by Jenna Hinton and the playing of her orchestra was excellent.