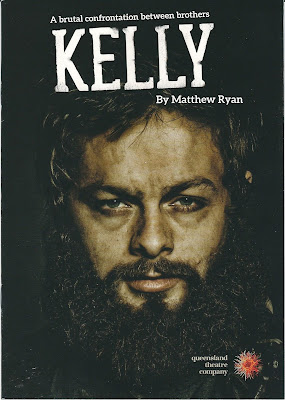 ‘I AM this country’, declares Ned Kelly at a key moment in the play.  Was he aware of his legendary status to come or was he just a deluded individual dangerously believing his own publicity?

In Matthew Ryan’s strong play, all sides of the Kelly legend are presented in a fictitious meeting between him and his brother, Dan Kelly, in his gaol cell the night before his execution.  Sibling rivalry spills over into violence, accusations of cowardice and even homosexuality while the brothers’ widely differing points of view of key incidents in the Kelly saga are discussed and re-enacted.

Dan Kelly, of course, was officially listed as perishing in the fire at Glenrowan which resulted in the capture of Ned Kelly.  However, over the following years four Queensland men declared they were Dan Kelly and, while none of the claims were backed up by evidence, it all added to the legend surrounding Ned.

Director, Todd MacDonald, has provided an atmospheric, tightly paced and very physical production.  His cast of three give excellent performances.  As Ned Kelly, Steven Rooke has the advantage of looking like Ned Kelly but backs this up with a highly controlled performance of great depth.  As his brother, Dan Kelly, Kevin Spink provides the emotional heart of the play.  At times angry and just as violent as Ned, he also displays an unexpectedly disarming, tender side.  Anthony Standish is also impressive as the brutal prison guard and other characters in the Kelly story.  You don’t realize how much you’ve been drawn into the emotional interaction of the characters until the guard tells Ned Kelly, ‘It’s time’, and he walks fearlessly off to his execution.  At that point, there wouldn’t have been a dry eye in the house.

The prison set, designed by Simone Romaniuk, is stark but atmospheric and is enhanced by the excellent lighting by Ben Hughes and the sound design by Guy Webster.  The attention to detail in the costumes was especially notable, down to Ned Kelly’s appropriately worn and scuffed boots.

The story of Ned Kelly has been told often and the lines between fact and fiction have become blurred.  Matthew Ryan’s clever play, coming at the legend from an unexpected angle, breathes new life into the whole saga.