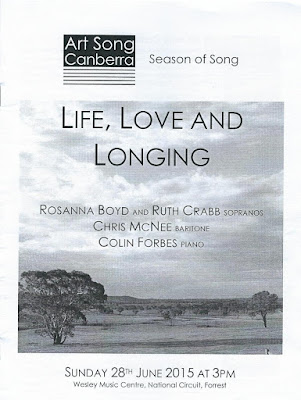 Rosanna Boyd’s set of songs ranged across the centuries from Mozart to Faure to Sondheim.  The songs were good choices to display her fine young soprano voice and in the Sondheim theatre piece, ‘Green Finch and Linnet Bird’, she displayed her acting skills with a nice depth of character for the girl trapped in her life like a bird in a cage.  The highlight of her set was the traditional Irish song, ‘She Moved Through The Fair’, to which she gave a sensitive, dreamlike quality.

Ruth Crabb sang her set confidently and with great technical skill.  Her pleasing soprano was heard to excellent effect in ‘A Green Cornfield’ from Christina Rossetti’s poem with music by Michael Head.  She also sang two pieces set to music by Calvin Bowman based on works by cartoonist, Michael Leunig, and delightfully brought out the sly humour in both of them.  Two poems by Walter de la Mare, ‘Silver’ and ‘The Ride-by-Nights’, again with music by Calvin Bowman, rounded out her performance and her singing of ‘Silver’ was particularly pleasing.

Young baritone, Chris McNee, started his program with three pieces from Schubert’s, ‘Swan Song’.  His choices displayed the full colour of his fine voice.  It can be a trap to overdo the drama in ‘The Doppelganger’ but it was sung simply here and was very effective as a result.  He also gave a pleasing performance of Beethoven’s song about the king and the flea from Goethe’s ‘Faust’.  As well as displaying a fine voice, Chris McNee also showed great onstage confidence and humour when explaining his songs to the audience.

Piano accompanist, Colin Forbes, gave great support to all of the singers and it was, as always, a pleasure to hear him play.

Art Song Canberra included after show drinks and a remarkably fine selection of home-made sandwiches and cakes for their audience.  Helen Raymond’s fruit cake was so delicious it deserves an excellent review on its own!

This was a fine concert and a really nice way to spend a wintry afternoon listening to three of Canberra’s fine singers with an excellent program of music.


Len Power’s reviews are also broadcast in the ‘Artcetera’ program on Artsound FM 92.7 on Saturdays from 9am.

Posted by Canberra Critics Circle at 11:27 AM