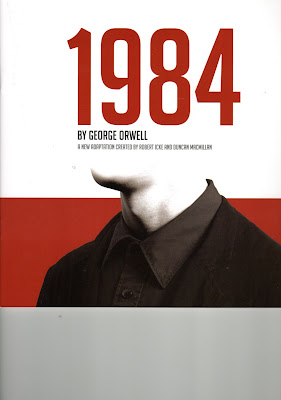 Who would have thought that three decades past the real 1984, this physical theatrical embodiment of George Orwell’s 1948 dystopian vision of the future could make the worst features of our world now so transparent.

The torturer, O’Brien, played excruciatingly brilliantly by Terence Crawford, explains as he ‘cures’ Winston Smith’s ‘insanity’that Big Brother is not like the earlier Nazis or Russian Communists:

“They pretended, perhaps they even believed, that they had seized power unwillingly and for a limited time, and that just round the corner there lay a paradise where human beings would be free and equal.  We are not like that.  We know that no one ever seizes power with the intention of relinquishing it.  Power is not a means, it is an end.  One does not establish a dictatorship in order to safeguard a revolution; one makes a revolution in order to establish the dictatorship.  The object of persecution is persecution.  The object of torture is torture.  The object of power is power.  Now do you begin to understand me?”

Well, we only have to look around the world post-1984 to find established and up-and-coming dictatorial regimes, especially currently, but not only, in the Islamic Middle East.  But worst of all, the perception that politicians seek power for its own sake and not for the benefit of the people is now undermining ‘representative’ democracies.  You might see Putin or Erdogan as examples, but Trump is trending in their direction.  In Australia we are losing our enthusiasm for a ‘fair go’.

What Robert Icke and Duncan Macmillan have done is not so much adapt Orwell’s novel as make the message of 1984 a visceral experience.  For me, an image I could not escape was when Winston is in Room 101, described in the novel:  “He was strapped into a chair surrounded by dials, under dazzling lights.  A man in a white coat was reading the dials.  There was a tramp of heavy boots outside.  The door clanged open.  The waxed-faced officer marched in, followed by two guards.”  Watching Tom Conroy strapped in his chair as Winston, made me feel sick to think of Dylan Voller in a ‘spitting hood’ strapped in a chair in the Northern Territory Don Dale Youth Detention Centre.

On a bigger scale, even though I sat in Row L in the large Canberra Theatre, the use of sound, lights and video made me feel entirely absorbed into the terribly disturbing atmosphere.  Where Orwell had only words to set our imaginations going, these designers assaulted our senses for real.  The whole 100 minutes was a choreographed, dramatically timed explosive dance of sound and silence, brilliant light and blackness, performers in action and stillness, voicing and in silent observation, and even whole sections of the set constructed and deconstructed.  A magnificent design.

In the end Orwell’s understanding of human social psychology comes to a very bleak conclusion, so I wonder if it’s worth asking politicians to experience this powerful theatre in the hope that they may learn a better insight into how and why they behave as they do.  Reports in January 2017 recorded that 1984 “became the best-selling book on Amazon.com” following Donald Trump’s inauguration, but I fear that’s just all the Winston Smith’s like me with romantic ideas about human rights and good governance.


Posted by Canberra Critics Circle at 1:20 AM