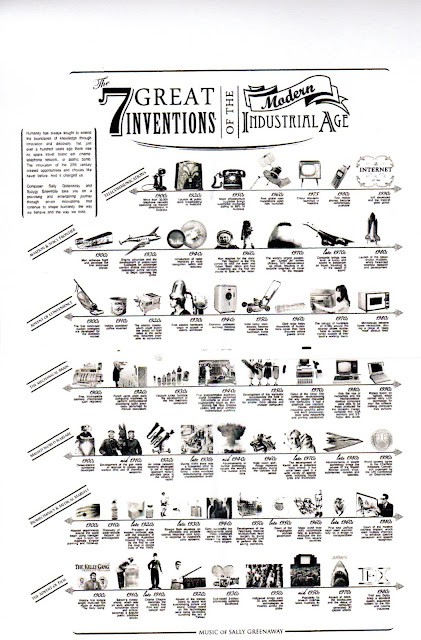 This commission was initiated by the Merlyn Myer Fund and co-developed by the Fund and Melbourne Recital Centre.

In 60 minutes, Harry Hawkins, having been left on the ground in 1903 by his floating Zeppelin dirigible airship, travels 80 years around the world of the 20th Century.  Dene Kermond communicates with his pilot, named Sigmund (I think, unless that’s a Freudian slip on my part) by a kind of Morse code from Ziggy through to satellite phone when Harry gets that far.

Ziggy seems to be able to watch Harry’s quirky progress, making comments via the unnamed but brilliant percussionist.  In fact Syzygy seems to keep its members difficult to name, but I think I have found the others: Jenny Khafagi – violin; Laila Engle – flute; Robin Henry – clarinet; Leigh Harrold – piano; and (I hope I’m right) guest artist, Campbell Banks  – cello.  They need a special commendation for being forced to act as well as play Greenaway’s illustrative film-score-like music.


Harry talks directly to us as we travel with him on his journey of discovery, while he also often expresses himself in mime, rather reminiscent of Marcel Marceau (though he wasn’t credited as he might have been as a mid-20th Century discovery).


The character of Harry, as played by Dene, was often amusing in a mild kind of way, except for a reflective quiet time in recognition of the horrors of the world wars.  In the end, I found the piece – as theatre – whimsical rather than more deeply exploring the nature of, and effects of, these 7 Great Inventions.  Much of the music, I thought, reflected conventional expectations, illustrating features of the ‘inventions’ rather than interpreting history in a new way; while Harry was often surprised and quite fascinated by what he found, in the mode of 19th Century unthinking exploration (and colonisation) when perhaps he could have delved more into the changes in 20th  Century behaviour from his moral point of view.

So, though 7 Great Inventions was quite fun to watch, with some enjoyable audience participation, I feel there’s an opportunity to develop the piece into a more substantial story of the goods and bads of last century, especially considering the high quality of Greenaway’s compositional ability and of the musicians’ performance.

Posted by Canberra Critics Circle at 11:08 AM