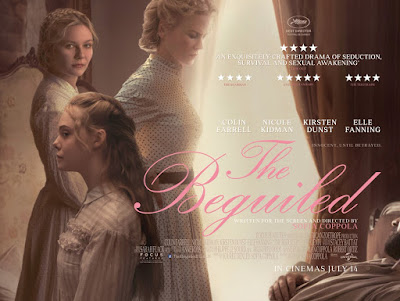 Like so much, it all depends on point of view. Is it the male of the species or is it the female who is beguiled, mind and body a welter of desire? This simmering drama of sexual repression set during the American Civil War begins with a delicate balancing act when a wounded Union soldier is found in the woods and taken into a seminary for Southerner women to recover. To begin with, the interactions are a delicate balancing act.

There is much to make of the location in Virginia, knowingly chosen we can be sure. Near a wood where mosses hang from lofty trees, stands a mansion fronted by a row of massive columns. There’s plenty for the semiologists to work with here. At the same time, it’s easy to discern within, the kernel of a contemporary fairy tale warning young men to stay away from the evil witches in the forest who will consume them then cast them out. Be careful what you wish for.

Behind the high gates and overgrown garden, a small group of women and girls, two teachers and five students, have remained during the long years of war with only each other for company. Now there is a desirable, willing male in the form of Colin Farrell in their midst. The man himself, in a waking dream of possibilities that float around him in pale gowns as they minister to his needs, might think he’s never had such luck.

As they watch over him, drifting in and out of consciousness, a perfect specimen apart from his wounded leg, desire awakes in them too in the subdued lighting of candle-lit interiors, the way it was at the time.

Things get rolling when the headmistress, Martha Farnsworth (Nicole Kidman) bathes him while he is unconscious, or may be foxing. Soon he receives visits from a flustered but aroused Edwina (Kirsten Dunst) and a very saucy Alicia (Elle Fanning) drops by to plant a kiss while he sleeps. Corporal John McBurney opts for a strategy of divide and conquer.

For some reason, key scenes – like the moment McBurney propositions Edwina –  develop in a rush that wrong-foots the drama and truncates delicately unfolding tensions. The direction of some crucial scenes sees the drama lose some of its power. If Coppola was working with suggestions that she be less indulgent while developing atmosphere, something she was so good at in The Virgin Suicides and Lost in Translation, then she shouldn’t have taken a blind bit of notice here. When the director was camping up the gothic with Kidman asking for the anatomy text before she got to work, the sudden appearance of the book would have been more fun.

I’m probably not the only one to have seen a Nurse Ratched (One Flew Over the Cuckoo’s Nest) in  Kidman’s Martha Farnsworth.

Clearly accustomed to ruling the roost where women are concerned, McBurney has just to turn his big brown eyes in the direction of any of the women, and he could have his way with them. The other four are too young and thankfully not part of these games. Writer-director Coppola has veered away from the moment of pre-pubescent sexuality of her film’s 1971 predecessor with Clint Eastwood. The children watch on, pliant and observing until they become players themselves, in ultimately disconcertingly effective ways.

It was common human decency that got the rooster into the hen house in the first place, quickly followed by charity that decided he could stay until recovered, but it is desire, and with it comes competition, that quickly takes over as he becomes step-by-step a prisoner. That’s not to say he isn’t happy to remaining in his conveniently safe haven and wait out the end of the war, but the pale gowns the women and girls wear signify an innocence that masks darker feelings beneath.

Over recent months we have watched My Cousin Rachel—did she or didn’t she?—followed by an indomitable Lady Macbeth and now The Beguiled. It’s interesting times we live in.