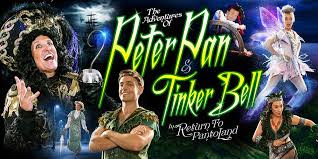 Best known in Australia as a judge in the Television series, So You Think You Can Dance, Bonnie Lythgoe is also a flamboyant theatre producer with a passion for pantomime. As one who has fond memories of the lavish Tivoli pantos when Jenny Howard reigned supreme as Principal Boy, on the Tivoli circuit. Then later when she toured country areas in Sorlie’s travelling tent show, when the Saturday afternoon panto, with Jenny as the Principal boy, and the irrepressible Bobby Lebrun as the very blokey dame, their performances seeded a lifetime fascination with theatre.

Lythgoe’s production of “The Adventures of Peter Pan & Tinker Bell” doesn’t have a Principal Boy or a Dame in the traditional sense. Instead it has a serviceable script, written script by Christopher Wood, who is also responsible for the attractive set and costumes, which follows the dot-points of the familiar story.  Including topical references, attractive original songs by Claire Dallison Weitz and Ian Wherry, and Juliette Verne’s  snappily choreographed production numbers, Wood follows the modern British panto tradition of being “a theatrical entertainment, mainly for children, which involves music, topical jokes and slapstick comedy, based on a fairy tale or nursery story”.

The show has admirable production values with colourful, storybook settings, pretty costumes, and lots of star cloths that glitter and sparkle under the colourful lighting, even if   the busy lighting design does tend to overlook the necessity of highlighting the actors faces.

The cast is attractive and energetic led by British comedian, Kev Orkian, who quickly engages the audience, and skilfully anchors the show as a very funny, character called Smee.  Orkian’s physical comedy is a joy, and his engagement with the audience is masterful, particularly in the two hilarious routines, one concerning confusion with names, and the other involving toilet rolls tosed out into the audience. Both send the audience into hysterics, and in both, he gets great support from his four pirate off-siders, Ric Pragnell, Matthew Geronomi, Michael Stone, and Jay Johns, who also contribute some impressive dance moves elsewhere along the way.
Orkian gets a run for his money from the spectacularly costumed Todd McKenney as the dastardly Captain Hook,  Johnny Depp could take a lesson from McKenney, who gave every appearance of enjoying himself enormously, whipping the kids into a frenzy of booing with his antics, and twirling his moustache and nailing each song with considerable style and panache.

Katrina Retallick completes the triumvirate, charming firstly as Mrs Darling, then deliciously dorky as Mimi the Magic Mermaid, complete with sequinned fishtail and three fishy attendants in the hard-working trio, Natasha Window, Sophie Holloway and Emmy Saheki, who dance up a storm in a succession of roles throughout the show.

Tim Maddren does some impressive flying as Peter Pan, Jaime Hadwen is delightful as a roller-skating Tinker Bell, and glamorous Robyn Loau works hard to make an impression in the rather thankless role of Tiger Lily.

So does Panto still do it for contemporary kids?  Judging from the reaction of the normally reserved, Miss Five, whom I borrowed for the evening as my quality-control app, it sure does. She booed with gusto, sang along with the songs, laughed at every gag, delighted at being sprayed by water-pistols, and by the end of the finale, was so entranced, that she jumped out of her seat and blissfully ran down the aisle towards the cascading bubbles.

Thank you, Ms. Lythgoe, for this opportunity to introduce her to the magic of live panto. Hopefully it will inspire her also to a lifetime of many more such magical theatrical experiences.

This review is also published in Australian Arts Review. www.artsreview.com.au