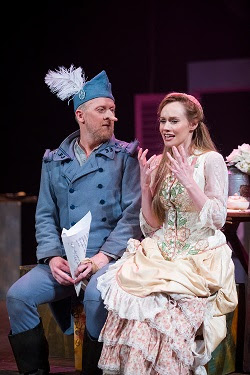 Dashing soldier Cyrano is a man of many talents, but his chief flaw is as plain as the nose on his face: his schnoz juts out like a crinkle-cut French fry.

Sport for Jove's excellent adaptation of the classic play by Rostand bursts with vibrant personality, with Damien Ryan pulling double duty both as the author of the adaptation and as the titular Cyrano.

The original cavalier era setting is replaced with the more economic to stage WW1, with Cyrano's chivalry lightly clipped to provide a tougher representation of the character that emphasises the soldier as much as the scholar.

The plot has Cyrano falling for the spectacularly attractive Roxanne (Lizzie Schebesta is stunning as the intellectually daunting suffragette).  Utterly convinced that his ugliness means no woman will love him, he tries to get satisfaction by proxy by feeding lines to the dim but handsome Christian (Scott Sheridan).

The play is performed with cartoonish gusto that riffs on the play's theatricality, as frequently goofy and absurd as it is deeply moving.

Ryan's performance has all of the panache an audience could ask for in a Cyrano, but also sheds light on his warped psychology.  Cyrano frequently bullies an incompetent but overconfident actor, and in one touching moment of clarity comes close to realising it is because this buffoon loves himself with an energy that Cyrano cannot muster for himself.

In this production so much emphasis is placed on Cyrano's gifts and the deep love he is surrounded by that he becomes especially tragic.  It is not the judgement of the world, but his own vanity, that prevents him from being with his love.

And this is where Ryan's charisma makes his character slightly implausible: his Cyrano is so impossibly dashing that surely he must be surrounded by a bevvy of admirers (we do actually see one woman creep up to him and try to desperately flirt, but he is oblivious).

In one early scene, Cyrano responds to an insult directed at his nose by making better insults of his own, an encyclopaedic catalogue that demonstrates the virtuosity of the writer but gives us the fatal impression that Cyrano is actually pretty chill about his nose.

The problem is compounded by the brilliant chemistry between Ryan and Schebesta, which is so intense that Christian feels completely redundant to the love triangle.  In early scenes, it does genuinely seem as though Rozanne is highly taken with the audacious and dashing soldier.

Sport for Jove's production stumbles into the paradoxical problem that it is uniformly brilliant, but has so much material to get through that it is inevitably over-long.  Perhaps because the lead actor also drafted the script, sequences that should be much shorter (like the sequence where Cyrano rattles off insults on his own nose) bog down the play.  The opening of the play, with house lights up and the actors wandering the theatre, is typical: creative and well-executed, but so indulgent that it slows down the play.  The best sequence is arguably the famous garden scene, and it is no surprise that it is also the one part of the play that moves at a cracking pace.

But for these flaws, Cyrano is an excellent production, as brilliantly performed as we can always expect of a production by Sport for Jove, and an ample supply of both hilarious and heart-breaking moments.
Posted by Canberra Critics Circle at 8:07 PM