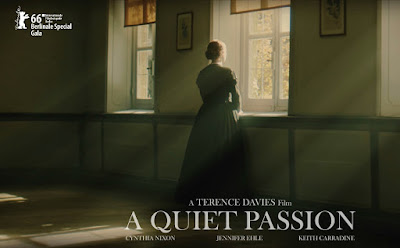 In her day, the American poet Emily Dickinson was a kind of free thinker and early feminist, but she hardly crossed her front porch into the world. Later in life she hardly left her room. She lived through her words. The writer and recluse has been kept alive by posterity, and is now thrust into public view in this film by Terence Davies.

The filmmaker says that A Quiet Passion is his creative take on the eccentric literary figure, but the film sticks pretty closely to the known facts, and though Davies’ modesty may ward off the fulminating critics, there was little to work with anyway. Dickinson never married, she had a habit of wearing only white—an interesting juxtaposition—and remained in the family home in Massachusetts till her death.

During her lifetime fewer than a dozen of her poems were published and her younger sister arranged for the publication of the vast bulk of her work after she died.

Some of the poetry is heard in voiceover, and suggests valuable insights, but there is too little about her writing. Davies could have at least put more of those poems to work. After all, it seems to have been where she fully expressed herself and how she reached out to the world.

Otherwise, the ambience of mid-19th century piety and seclusion in the Dickinson household is very compelling. The austere and painterly look, the work of cinematographer Florian Hoffmeister, creates a cloistered private world in which little alters as the years pass.

However, a slow 360 ° panning shot around the parlour that takes in family members and objects registers subtle change. And at another point, the passage of time is deftly realised at a session with a photographer taking family portraits. This is where the family merges into their older selves, and when Emma Bell, the young Emily, leaves the frame and Cynthia Nixon takes over.

Though her lines can’t have been helpful, Nixon is great in a challenging role. The jarring dialogue and awkward interactions are a major part of the film’s distraction. When I suppose we are meant to lighten up, we are treated to the tiresome, formulaic wit of Vryling Buffam (Catherine Bailey), a friend who has an inexplicable knack for entertaining Emily and her devoted sister Vinnie (Jennifer Ehle).

It’s not unduly long. Most films seem to unspool at around two hours these days, and some of the best ever are still going strong well after that, with dialogue in a language other than English to boot.

There are lengthy deathbed scenes, and towards the end of Emily’s life the camera rubbernecks into her freshly dug grave. A strange shot that may coincide with the poet’s gloomy outlook. A home overlooking a cemetery would have had some impact, one imagines.

Aside from its impressive and uncompromising authenticity, A Quiet Passion is difficult and sometimes gruelling.  Veteran auteur Davies, the director of the wonderful Distant Voices, Still Lives, says he is an acquired taste, but may be asking too much of filmgoers here.