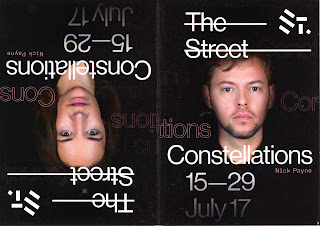 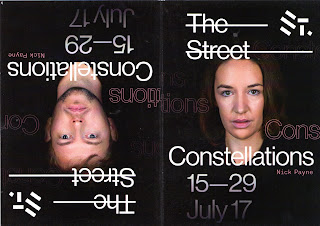 
Constellations brought to my mind the injunction laid upon me in childhood by my father:  Thank your lucky stars!  This was usually after I had survived some, at least to me, major trauma.  All these decades later, Nick Payne, almost young enough to be my grandson, has produced a much more sophisticated way of saying what my father told me.

Though Marianne is a physicist, keen on explaining to Roland, a bee-keeper, about the difference between Einstein’s General Theory of Relativity (all about the big things in the universe) and Neils Bohr’s theory of Quantum Mechanics (about all the tiny things), the key to the play is the survival – or not – of the inevitable trauma we all face living as we do in a universe operating by the Principle of Uncertainty.

This makes the universal very personal.  Whatever we would like to think, we do not have ‘control’.  As Marianne says, people used to have ‘faith’ – which she would love to have now that her frontal-lobe brain tumour is slowly disintegrating her power of speech – but today she can only say ‘fuck God’.

But Uncertainty means this Roland/Marianne story may not be the only one.  It may not have begun meeting ‘by chance’ at a barbecue and be ended with barbiturate (she can only get as far as saying ‘barb....’ by that point).  Perhaps their first feelings which seemed to form them into twin stars within a constellation of family and workmates, and the decisions they each made, may never have had to face that particular disruption.  They might have lived happily ever after.

But Payne cannot let us get away with fooling ourselves, since at every point these two decide what to do, both they and others in their constellation may have made other decisions.  And so, as we watch momentary snippets of their possible lives, we find ourselves creating in our imaginations perhaps half a dozen parallel but slightly different trajectories of this couple’s life, representing the conclusions of String Theory and the idea of there actually being Multiple Universes.

For the actors, Payne sets a magnificent challenge.  At each change, often after only a minute or two, Kristian and Lexi have to know where they are in each possible life, and immediately establish what they know in the audience’s perception, until the next change.  Though the personalities of the two remain more or less consistent (otherwise we would be completely lost), their responses emotionally to each situation can be wildly different.  The snippets we see are not only taken from different ‘lives’ but (because as Marianne explains, time can be bent – or may be only a concept in our minds) the order of events is mixed.  How on earth director Carolyn and the actors ever managed to work it all out, I find hard to imagine.  Perhaps, in the spirit of uncertainty, all they had to do was decide for themselves without worrying too much about what the author may have had in mind.

Whatever, it worked very well.  For Kristian as the more phlegmatic bee-keeper Roland, the task was perhaps a little easier, since most scenes depended on the more extreme differences in mood and behaviour of the Mariannes to which his Rolands had to respond.  Lexi was quite extraordinary in her creation of all the Mariannes, based upon a central contrast between her personality as an uncertain girl and her intellectual capacity as a professional academic.

The result is an interesting play – almost a new form of theatre.  There are elements of what was known in mid-last century as Absurdism – the snippets from different universes don’t follow ‘normal’ expectations.  But those plays (from Ionesco’s Rhinoceros, via Beckett’s Waiting for Godot and through even to today’s Shaun Micallef’s MAD AS HELL all blame society for breaking down.  Payne says it’s not our fault.

Constellations also has an ‘alienation’ effect rather like Brecht’s Verfremdungseffekt.  Just before the end, as Marianne is preparing for voluntary euthanasia, we feel the sadness of her situation perhaps more than thinking about the logic of her decision; but in the final scene, we see the couple back at the original barbecue about to begin a new happy life together.  Though we know we should have some doubts after what we have seen in various iterations of this couple in parallel universes, we can’t help feeling engaged and positive about their future this time around.

As in Brecht’s plays we are left thinking, but (once again compared with Absurdism) we are not left blaming human politics.  We can’t blame the Universe for being what it is, even if it is unexpectedly full of Multiverses.  Payne allows us to feel the negatives and the positives, while we think about reality.

Quite remarkable, when you think about it!  Let’s thank our lucky stars.