Antony and Cleopatra - Royal Shakespeare on stage and screen 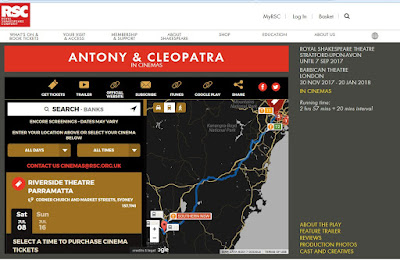 Reviewed by Frank McKone
May 24 and July 1

As Octavius Caesar proclaimed, to us seated in the farther reaches of the upper circle in this most prestigious theatre of the Royal Shakespeare Company in Stratford upon Avon,

She shall be buried by her Antony:
No grave upon the earth shall clip in it
A pair so famous.  High events as these
Strike those that make them; and their story is
No less in pity than his glory which
Brought them to be lamented.

my wife and I felt some uncertainty, some vague misgiving, about this magnificent stage production.

From the grand, even mystical, ceremonial opening to this eloquent finale everything had seemed to be in place.  But – my wife raised the question – what about the laughter when Antony tried to kill himself, but failed and exclaimed How!  not dead?  not dead?  And so I also thought, there was laughter when Cleopatra’s women struggled to pull Antony, dying, up to Cleopatra, in the Monument.  The stage instruction in my copy simply states [They heave Antony aloft to Cleopatra.
And these two moments were still in our discussion as I went, a month and a half later, to view the movie made on that very day.  Had we been in any of the shots as the cameras on their long gantries had smoothly swooped around the auditorium below our perch in the Gods?  Had the presence of the cameras, and the time taken before the show began and at interval to interview the director, Iqbal Khan, and the composer, Laura Mvula (without our being able to hear what was said) affected the performance?  Or the audience’s reactions?  Was there more to be thought about Shakespeare’s play and this production when seen on a cinema screen recorded by multiple cameras (with about 6 people in the immediate audience at Dendy), after watching, listening and feeling in the expansive space and atmosphere, surrounded by a massive body of other people, for the same three and a half hours in Stratford?

On screen we did get to see and hear the interviews; and we also had the same twenty minute interval which allowed for a takeaway flat white in the bland Dendy foyer, rather than absorbing the late-evening views over the Avon River.

The movie enhanced some features of the stage production, and in doing so revealed what I think was the cause of our original uncertain feelings.

Both onstage and onscreen, the strength of the acting makes a direct impact.  An example which stood out for me was watching Enobarbus as he realises he must leave the now failing Antony and at last is left alone with absolutely nowhere to go.  This worked well on the distant stage with its empty spaces around him, and worked as well on film in middle distance shots leaving him in the empty space of an unfocussed background.

The mystical effect of the movement of huge sections of the set and the attendant lighting which had impressed when we looked down upon it from the great distance of the upper circle became even more dramatic on screen as the cameras in the stalls gave us the looming presence and could increase the effect of movement by slowly zooming in while the set moved towards us; or could increase our excitement at group scenes in middle or close-up shots, for which we had needed binoculars to see detail.

But it was the use of close-up to show actions and reactions, especially facial responses, that made the film far better than binoculars could ever do.  Going with this was the way that the spoken word and clarity of the language was enhanced in close-up.  Yet it was this that revealed aspects of the production which had caused our modicum of discontent.

What became evident was that the production was set at two registers.  One was what I would call ‘declaratory’ while the other could be called ‘intimate’, though that did not always mean softening of feelings between characters.  Intimate scenes between Cleopatra and her women, and with Antony often saw explosive manners of speaking rather than more subtle communication between these imperial figures.

From a distance, and being aware of practical matters like natural voice projection, the point of these scenes came through in strong characterisations of these personalities.  But on screen in close-up I became much more aware of the style of acting being expected by this director.  The actors, especially Antony Byrne and Josette Simon, demonstrated their voice and movement skills, but they were not being asked to create much depth of tenderness or love – despite Shakespeare’s words.

In thinking about the triumvirate of Antony, Lepidus and Octavius Caesar, on stage Lepidus rather disappeared in contrast to the continuous over-the-top declarations by Caesar, and later by Pompey.  Though it was clear that Antony was meant to be the ‘greater’ man, seeing Caesar and Pompey for the shallow figures they were, his position was not so well established from the point of view of the upper circle.

In close-up on screen, especially in the scene in which the three finally reach a handshake agreement, Lepidus’ strength of commonsense character is far more established than could be felt in the theatre, while Antony’s beginning to feel more insecure in his role as a politician and warfare commander becomes clearer than could be seen on stage.

And so, in my reflection now, looking back over space and time on a production of great strength, I think what was missing was what I might call the ‘managerial’ level, to provide a kind of fulcrum balance point between 'declaration' and 'intimacy'.  I think the grand scale of Khan’s concept lost the sense of these imperial figures being the managers of large empires, dealing with the inevitable internal disagreements, trying to find ways around the worst conflicts, and finally having to make decisions to force the issue.  Around me, in Canberra today, public servants are engaged in this kind of ‘managerialism’ every day (while there are certain politicians – currently especially in New South Wales and in the USA – who operate most of the time at the declaratory level, I admit).

And it is not unknown for sexual relations among office colleagues to cause managerial and political mayhem.   We still talk of ‘backstabbing’ and ‘execution’, while for Shakespeare, living in his time with absolute monarchy, these were physical reality.  Do the tour of his house – the most expensive in Stratford in his time – and you get a feel for how cleverly he managed for success.

To conclude, then, the audience’s laughter at those two moments felt inappropriate to me when I heard it while watching the movie.  Though at those points first Antony’s and then Cleopatra’s management was clumsy in the face of inevitable failure, his language style should have been about being determined to solve the problem; while the ‘heaving’ of Antony up to Cleopatra should have been done by the soldiers who had carried him to the monument in a ceremonial respectful mood.

Then the strength of intimacy of the lovers’ final scene, where Antony advises Cleopatra, even as he knows he is dying, to be realistic and accept Caesar’s win, noting that she should trust only Proculeius, and she, while kissing him, maintains her independence saying “My resolution and my hands I’ll trust;/ None about Caesar.” would not have been diminished by that laughter.

My wife and I, I believe, would then have been even more satisfied on that day in that theatre, while I advise going to see the movie for an excellent production in its own right.