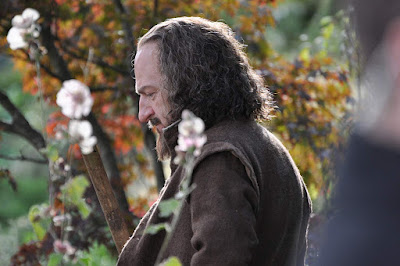 
This is Shakespeare as you have never seen him before, and might find hard to believe. It takes place during the last three years of his life, when he had returned from London to live at his family home in the countryside, working on the garden. There is not a jot of creative writing in sight.

When the Globe Theatre burned to the ground in 1613, after a canon misfire during a performance of Shakespeare’s last play, he retreated to Stratford-upon Avon, to live with his wife and daughters.


a tantalisingly vacant space to fill

Little is known about him during the years before his death, a relatively sudden event, at 52. It is a tantalising vacant space to fill in the Bard’s life, into which steps veteran actor Kenneth Branagh.

The only portrait we have of Shakespeare depicts a man with a sensual mouth and a wide intelligent brow. In his period wig and beard, the appearance of a heavily disguised Branagh with prosthetically lengthened nose, is a close enough to the mark.


Ben Elton’s screenplay imagines the great man in everyday life, in a contemplative frame of mind, even getting an occasional reproach for absences and lapses from his wife, Anne Hathaway (played here by the redoubtable Judi Dench), and daughters Judith (Kathryn Wilder) and Susannah (Lydia Wilson).

An occasional visitor brings the outside world in. His patron, the Earl of Southampton (a sprightly Ian McKellen), the ‘fair youth’ who inspired Shakespeare’s poetry, arrives for a chat in one of the film’s highlights.

This intimate meeting, like all other interactions indoors during the evening, takes place in candlelight. The production designer has kept all the period detail authentic, without concessions to modern cravings for atmosphere or expressive lighting.

Shakespeare is less pleased to see a young admirer and aspiring writer who drops in. It interrupts his gardening, and the youth is given short shrift with the advice to simply get started if he wants to write.

dismissive of his own legacy, consumed by the loss of his son

Some of the film’s key moments are filmed from a very low angle. It might be meant to signify Shakespeare’s greatness, to remind us of his lofty stature as a poet and dramatist for all time, but it just looks a bit odd.

While Shakespeare is dismissive of his own legacy in this life story, he is consumed by the loss of his son, 11-year-old Hamnet who died many years before, while he was away.

Few of us may have known that he had a son, and the fact of it makes an interesting focal point of this homecoming by a man so absent from family, and so much of the world.

All is True is the alternative title of Shakespeare’s last play, Henry VIII, a collaboration with one John Fletcher, who doesn’t get a mention here. It’s a playful title for a film founded on conjecture rather than fact.

All in all, it’s a slight piece, and tends to sound contemporary, to help make the great man more accessible. He had family issues like everybody else, but I’m not convinced that Shakespeare’s family would have communicated with him the way they do during very different times, four centuries ago.

Production design and costumes and candle-lit interiors give the film a strong sense of authentic period detail, despite doubts about the authenticity of language, and of manners and family relationships.
The mystery that is William Shakespeare may never be resolved. Perhaps the intellectual acuity, wisdom and poetry of his plays and sonnets, a contribution to the English language that none can match, is all we need to know, and better kept that way.

Jane's reviews are also published on her blog, the Film Critics Circle of Australia, and broadcast on ArtSound FM 92.7
Posted by Canberra Critics Circle at 12:02 PM