THE REPORTS ON SARAH AND SALEEM 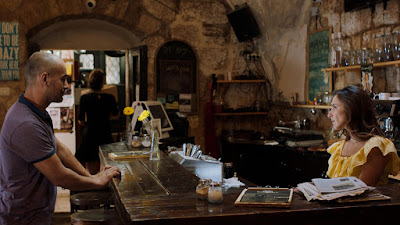 This film is from the Middle East, written and directed by Rami Alayan and Muayad Alayan, and about infidelity.  An affair between a Palestinian man and an Israeli woman who met as he made deliveries at her café in West Jerusalem, and the consequences of the liaison in a place where fidelity to one’s tribe is paramount.

The Reports on Sarah and Saleem was made with the assistance of production finance from countries like Germany and the Netherlands, as the Palestinian film industry is virtually non-existent.
It opens at the home of bakery delivery driver, Saleem, making tea for himself and his wife. The image of domestic harmony is suddenly ruptured, like a fist through a wall, in a raid by security forces who drag Saleem (Adeeb Safadi) away to interrogate him about an Israeli woman that he is supposed to have recruited.

What could the man have done to deserve such treatment? Flashbacks explain, as by that point the affair is over. 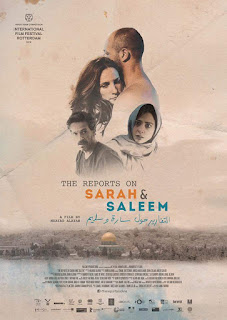 One night after meeting and making love in Saleem’s delivery van, as per usual, Sarah (Sivane Kretchner), had accompanied him on a delivery run into the West Bank, with hiding in the back of his van. The risky venture accomplished without incident, Saleem suggests a drink at a Bethlehem bar. Sarah agrees reluctantly, but they are betrayed by another patron who realises that she isn’t Dutch at all, as she claims, but Israeli.

After Saleem is hauled in for questioning and Sarah’s husband, a colonel in the Israeli army on undercover assignments, becomes aware of his wife’s infidelity, there is hell to pay. It is clear that no one can believe that the affair is just an affair, there has to be more to it.

It’s hard to imagine a worse predicament. Ensnared in a web of misunderstanding and paranoia, Sarah and Saleem become trapped between sides in the vicious and intractable feud that is the Israeli-Palestinian conflict.

How the affair had begun is not explored, unfortunately, only explained by scenes showing how the couple met across the counter at the café that Sarah runs. The opening titles claim the film is inspired by true events, so more insight into such risky liaisons would have been interesting. If relationships like this can and do happen, can we imagine there is hope yet for ending conflict?

It was also surprising to learn that alcohol is served at bars with intimate dance floors in the Palestinian Territories. A vigorous sex scene or two in the back of the van is another surprise.  A lot less pleasant is the jolt when, on the road to Bethlehem, Israel’s massive security wall suddenly looms into view, a foreboding and futile barrier to interaction.

All actors are captured up close and personal and they do a great job,  though the film style is a bit prosaic way and some scenes are needlessly long.

Towards the end, however, the deliberate pacing seems spot on. As our attention turns more and more to Saleem’s pregnant wife, Bisan (Maisa Abd Elhadi), and as a relationship develops between her and Sarah, the film becomes very moving and powerful.

Jane's reviews are also published at her blog, the Film Critics Circle of Australia, and broadcast on ArtSound FM 92.7 MHz
Posted by Canberra Critics Circle at 2:02 PM