THE WORLD GOES ROUND 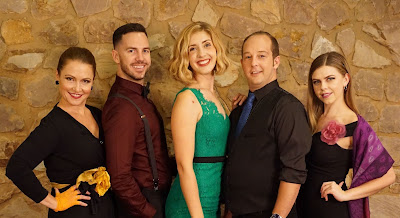 
The song writing team of Kander and Ebb are responsible for many of this centuries most iconic musicals, among them “Cabaret”, “Chicago” and “The Rink”. They’ve also written for film, as well as special material for celebrity performers, in particular, Liza Minnelli. “The World Goes Round” is a musical revue for which a selection of some of their best songs has been cleverly woven into a showcase for five outstanding performers.


Director, Jarrad West, has set his version, after hours, in a beautifully detailed evocation of a New York Night Club, designed by Chris Baldock, in which large posters of Kander and Ebb shows adorn the walls. During the show, the posters light up to indicate which show the song being performed is from. This is a clever touch, because although it’s not necessary to know this information, each song being a little story of its own, the additional knowledge certainly adds to the enjoyment.  .


The talented cast portray anonymous night club employees who arrive for work, set up the club, and eventually leave, having assumed a variety of personas as they interpret the songs.


It could have been disastrous for the production to have one of the original cast members, Samantha Marceddo, fall ill during the final days of rehearsal, but the production was fortunate in that both the Director, West, and choreographer, Caitlin Schilg, both excellent performers, were able to step in and take over Marceddo’s role at short notice, and indeed provide the show with some highlights of their own.


This is a show full of highlights, and each audience member will choose their own. For this reviewer, outstanding moments included almost everything performed by the remarkable  Louiza Blomfield, but particularly her full-throated version of “The World Goes Round”, which opens the show, Jarrad West’s superb interpretation of “Coloured Lights”, Julia Walker’s delightfully cheeky “Arthur in the Afternoon”, Isaac Gordon’s delicious take on “Sara Lee”, Joel Hutchings powerful “Kiss of the Spider Woman”, Caitlin Schilg’s gutsy “All that Jazz”, and the roller skating fun for “The Rink”.


West’s stagings of the many duets, trio and ensemble numbers are masterly and no doubt first night glitches with sound balance, missed lighting cues, occasional errant harmonies and sluggish pacing will be attended to quickly.  But over-all, this production is a triumph for Canberra Repertory, and most definitely one for your “must see” list.
Photos provided by Canberra Repertory.