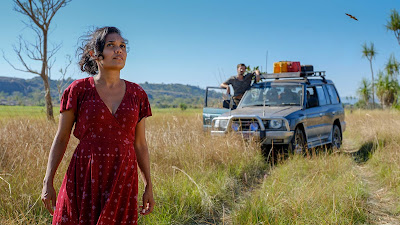 Everything was good to go and to go well. He had proposed on bended knee, she had accepted and even her intimidating boss had given her 10 days’ leave.
The wedding was to be held at short notice in Darwin, the bride’s home town, but when the pair arrive, they catch up with developments that put a stop to everything.

The bride’s mum has cleared out and is gallivanting around, who knows where. An enigmatic note she left offers no clue, while her dad cannot remember to get out of his pyjamas and keeps disappearing into the pantry where he keeps the Chicago ballad ‘If You Leave Me Now’ on rewind.

Now Lauren, played by the dynamic and very talented Miranda Tapsell, is as decisive as she is big-hearted, and immediately declares the wedding on hold. Her fiancé Ned, a laid-back Englishman played by Gwilym Lee, simply adores her and will do what needs to be done to make her happy. 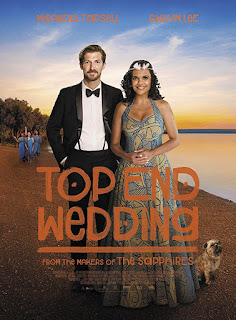 As the pair search high and low for Lauren’s mum, Daphne (Ursula Yovich), across Kakadu, through the Katherine Gorge and other stunning Northern Territory locations, she leads them a wild goose chase that includes an hilarious encounter with a hunky helicopter pilot who specialises in tours for mature female clients.

It is a pity we do not actually meet Daphne until the end, because Yovich brings so much to the role in the short time she has on screen and it would have been interesting to know more of her character’s story. The film’s first scenes are a flashback of her aboard a runabout, escaping to the mainland as her wedding party stand helplessly on the shore. Daphne has form at clearing out.

On the other hand, we could have done with less or, at least subtle, product placement. It is actually quite obtrusive here.

The high point in Top End Wedding is clearly the return to country, in the beautiful Tiwi Islands just north of Darwin. A joyous reunion is the beating heart of this film, a rousing finale brimming with goodwill for all. We would expect nothing less from Wayne Blair, who directed the outstanding musical comedy, The Sapphires, a huge success in 2012.

Miranda Tapsell was in that too, as one of a group of four Indigenous Australian singers who entertained troops in Vietnam in the 1960s. Here in Top End Wedding she is just as natural and charming, and shows how well she can carry a film on her own. What’s more she co-wrote it, with Joshua Tyler.

It is also terrific to see Kerry Fox as Hampton, the slave-driving boss who finds her heart, but some of the other characters in Top End Wedding are overdrawn and clichéd, a reminder that less is more. If the storytelling is at times a bit clumsy, at its best, this new romantic comedy is a frothy, feel-good treat.

Jane's reviews are also published on her blog and by the Film Critics Circle of Australia, and also broadcast on ArtSound FM 92.7 MHz
Posted by Canberra Critics Circle at 12:48 PM