Cat on a Hot Tin Roof by Tennessee Williams.  Sydney Theatre Company at Roslyn Packer Theatre April 29 – June 8, 2019.  By special arrangement with the University of the South, Sewanee, Tennessee.

Reviewed by Frank McKone
May 18 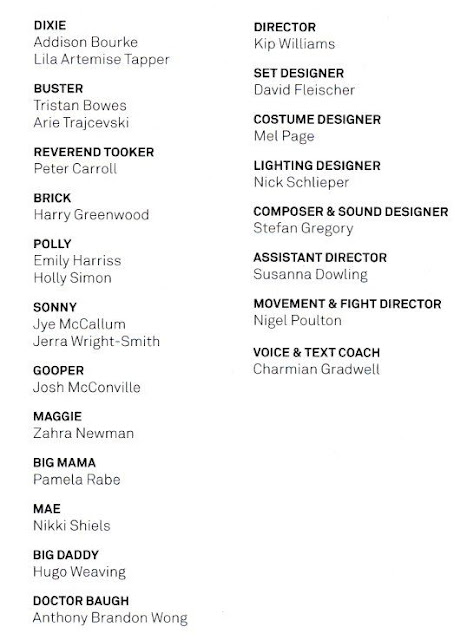 Kip Williams may be no relation, but his production of Cat on a Hot Tin Roof is  literally a vindication of Tennessee Williams’ brilliance.  It’s all about light, mirrors and reflection – a grand celebration of the work of lighting designer Nick Schlieper, within a magnificent space shaped by sound designer Stefan Gregory.

Nothing is out of place theatrically in this billionaire’s expansive mansion, except the family within, lost in the forces of jealousy, lust, frustration and retribution.  Though a sociologist might write an erudite essay on the social and economic causes in the nature of capitalism, this playing out of ‘a synthesis of all my life’, as Williams wrote, becomes a lived experience for us, watching from the safety of our theatre seats.

The design of the staging seems to have given the actors freedom of action, expression and feeling to match the magnificent space.

Zarah Newman’s Act One performance is almost beyond belief as Maggie – the cat on that terribly hot tin roof, where to stop for even a fraction of a second would be to be destroyed.

From even a simple acting-skills point of view, let alone accuracy of characterisation, Harry Greenwood’s manipulation of his body, balancing on one leg, wielding his crutch not so much as a support but as a weapon, becomes a horrifying representation of his psychological state.

I could give examples of every actor’s particular wonderful achievements, especially including the antics of the children (and the directing of such young ones), but will focus on Hugo Weaving’s voice.  Even Big Daddy could not physically fill the empty reaches of the space, yet his voice in anger was as frightening as the explosions of the fireworks to celebrate his birthday; while when weak in sorrow or confusion, the sound of Weaving’s voice carried his mood all around and off the stage, into our minds and even our hearts.  A great performance, indeed.

This is a modern production of a great American play which I’m fortunate not to have missed.  I hope it will go on tour, especially to Tennessee Williams’ homeland.  America needs to learn now as much as in the 1950s from its great artists; as we do here and all around the world, through the honesty and truth-telling of such writers, producers, directors, designers and actors.


For further thinking, the essay “Tennessee Williams: Life on a hot tin roof”, published in the program (with no acknowledged author!) is excellent, in addition to Kip Williams’ Director’s Note; while the interview with Hugo Weaving written by Harry Windsor, published in The Saturday Paper, May 18-24, 2019 adds a great deal more detail about the production than I have space for here.