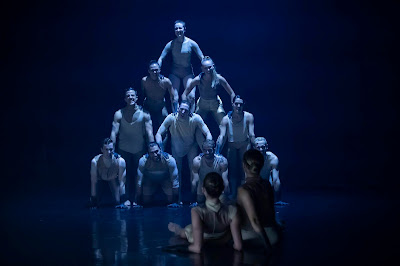 Sydney Dance Company is only showing the Bonachela/Nankivell/Lane season for three days in Canberra, but fortunate audiences will see a masterly collection of spare contemporary dance supported on a bare black stage by subtle costuming and some highly impressive lighting.

The opening piece, Gabrielle Nankivell’s Neon Aether (lit by Damien Cooper with costumes by Harriet Oxley) did not need programme notes to suggest the strange world of outer space and the humans that might pioneer it. There were silences and darknesses filled with the sounds of clanking doors and engines. There was a questing feel to the alert movements of the dancers. There was isolation but collaboration. Ursula le Guin’s Nine Lives, a challenging short story about the implications of cloning, came to mind.

The final piece, Woof, by Melanie Lane, was rather more of a crowd piece and warmer in mood and energy than the other two.  Again, subtle costuming (Aleisa Jelbart) and lighting (Verity Hampson) that involved some cunning use of black outs supported masterly group work by the dancers.
Music from Luke Smiles and Clark supported Neon Aether and Woof respectively with Alberto Ginastera’s String Quartet No 2 Op 26 being used for Cinco.

It was a programme that showcased the power and beauty and intelligence of contemporary dance.