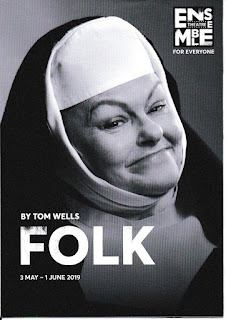 Reviewed by Frank McKone
May 17

All photos by Phil Erbacher

Folk is a quirky unusual 90 minute play about the end of one life and the beginning of another, accompanied by folk songs, in a ‘Dirty Old Town’ on the Yorkshire coast.

Three characters are oddly brought together in a church house provided for the past 35 years to accommodate an Irish nun, Sister Winnie.


Genevieve Lemon is a rumbustious centre of goodness in a town crucially damaged by the results of Margaret Thatcher industrial policies, the destruction of manual jobs by modern technology, the failure of schooling made worse by the developing internet, and the collapse of families in poverty.  Yet Sister Winnie is herself a victim – insistently cigarette smoking and drinking Guinness with Stephen, and now with angina at a dangerous stage.

Representing the working man, painting pipes for maintenance at the gas works, while playing guitar and tin whistles (which he makes from offcuts from work) and singing folk in private with Winnie, Gerard Carroll’s Stephen is self-effacing to a fault,  Yet he finds his way, despite his job becoming redundant, in an unexpected turn of events in the final scene.

15-year-old Kayleigh, pregnant to a boy who has just been killed in a car crash, literally crashes her way into Winnie’s singing-dancing lounge room.  Libby Asciak creates a character forced to rapidly grow up, with the help of Winnie’s insistence on treating her with goodness instead of the standard negativity.  How her relationship with Stephen changes is the central thread of the play.

The set design is cleverly built in to the Ensemble’s fourth wall – not between the actors and the audience in-almost-the round, but in relief on the back cyclorama wall, with a street door entrance, windows out of which Winnie blows her smoke, a staircase to the upstairs, and a doorway entrance into the kitchen.  The effect is to make us feel we are in Winnie’s lounge room with her, Stephen and Kayleigh.  In the aftershow Q&A, the cast said that each audience had been different, but many had joined in singing these songs from the folk revival period I remember of the 1960s.


I felt like singing along too, but our audience last Friday generally kept their singing under the breath – though I saw some lips moving.  This was the unusual feature of this script, where the characters were singing with each other for their own reasons, yet we felt we could sing with them, and react to what they said or did as if we were one of them.  Of course, it was Genevieve Lemon’s skill in creating the inclusive character of Winnie that made this work, but it was also the homely set design and the intimacy of the small theatre where we could all see each other, including the characters, in our circle, that makes this play an excellent choice for The Ensemble.