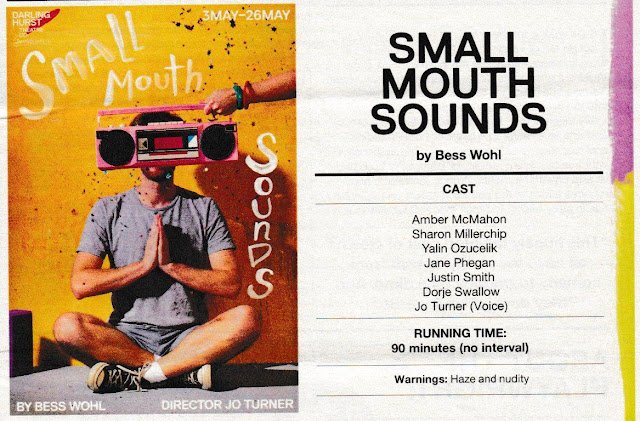 Reviewed by Frank McKone
May 7 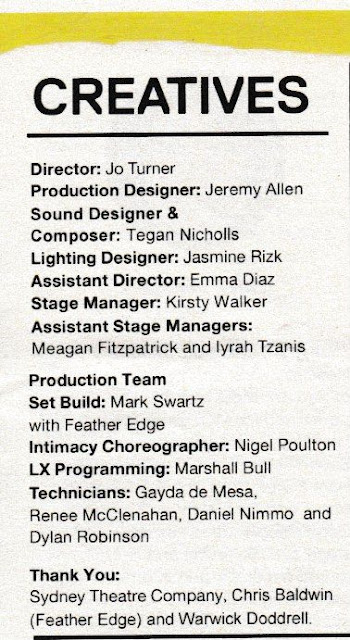 How good is your guru?  How true to yourself are you?  Are you a complacent little green frog deep in your narrow-bounded well; or are you a widely-travelled big colourful frog who knows the depth of the infinite sea?

Fact check:  How well do you feel, little green frog in your week-long strictly silent retreat, when your oh-so impressive-sounding guide-frog’s mobile phone rings.  Do you feel sick because the yoga mat has been pulled from under your hope?  Do you breathe out knowingly?  Laugh at the irony?  Feel a kind of wonder at the totally unexpected?  Feel almost frightened because something’s gone wrong?  Or know that at some point you are going to have to tell your life story because…well, you just need to, despite everything?


To try to explain to you all that Bess Wohl’s six characters in search of enlightenment go through would be ridiculous, and spoil for you what makes this satire so funny.  It’s equally subtle and LoL.

I will tell you about the staging, the acting, the costumes, the lighting, the accompanying sounds (not all small, and not all mouth, sounds), and why they needed an Intimacy Choreographer for a bit more than the warning about nudity.  All was done so well that within a few minutes you are drawn into forgetting your disbelief for 90 minutes straight.  But then, you ask yourself, what are you laughing at except your own capacity to believe nonsense?  More fool you!

But it also proves that the illusion of theatre, even if not Jo Turner’s lugubrious guru, can be an enlightening experience.  More satisfied you!

From a more pedestrian viewpoint, it is great (sorry, Mr Trump) to see Darlinghurst Theatre Company thoroughly fulfilling its purpose in life.  That is, to show us Australians that Americans (or at least this American woman) actually can have a sense of ironic humour, and that our actors and designers can exploit the opportunity to the max.

Every tiny movement, from eyebrow to little toe and literally everything in between, expressed character and the electric connection between characters so precisely, so tellingly – even between the Alicia (Amber McMahon), Joan (Sharon Millerchip), Ned (Yalin Ozucelik), Judy (Jane Phegan), Jan (Justin Smith and Rodney (Dorje Swallow) we could see on stage and the purely voice-over guru (Jo Turner).

Small Mouth Sounds is an original, intriguing play.  I loved the early morning Sydney magpies and cockatoos, a morning chorus to outdo any silent retreat, making this production thoroughly Australian.


Post Script:  I studiously avoid reading others’ reviews or commentaries, before writing, especially of plays new to me; but I wondered about my thoughts about the Aussie sense of irony.  So I went to the New York Times:
https://www.nytimes.com/2015/03/24/theater/review-small-mouth-sounds-silence-at-a-spiritual-spa.html
mainly to see if the original set design had been kept by Darlinghurst.

Yes, it has; but as I read on through Charles Isherwood’s review where he calls Small Mouth Sounds “enchanting”, refers to its “humour and pathos” and how the play “leaves behind its own warming glow”, I feel not so sure that all Americans would appreciate Jo Turner’s almost absurdist take.  Where Isherwood sees the play “laced with gentle satire”, I see a touch of American sentimentality which Turner’s production thankfully avoids.  See what you think.