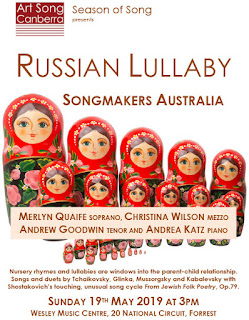 The first half of the program comprised a number of lullabies, some amusing and some that were darker in tone, by composers Glinka, Tchaikovsky, Kabalevsky and Mussorgsky.

‘Cradle Song’, by Glinka, a beautiful duet for soprano and tenor, was an excellent opening number, displaying the richness and fine blend of the voices of Merlyn Quaife and Andrew Goodwin.

Tchaikovsky’s ‘Winter Evening’ was sung with great accuracy and feeling by Andrew Goodwin.  Andrea Katz’s piano accompaniment for this song was exceptional.  Christina Wilson followed with a very amusing ‘There Was An Old Woman’ by Kabalevsky.  Sung very well, her playing of this old woman also had real depth of character.

Andrew Goodwin and Christina Wilson then gave us another finely sung duet with ‘The Lark’ by Glinka.

After interval, artistic director and piano accompanist, Andrea Katz, set the scene for ‘From Jewish Poetry’, a song cycle by Shostakovitch.  Composed in 1948 after the composer’s denunciation in 1947, the composer's situation and the official anti-Semitism of the time made a public premiere impossible until 1955.  The cycle is one of many works by Shostakovich to incorporate elements of Jewish music.

The eleven songs of the cycle were all memorably sung.  The opening song, ‘Lament over the death of a small child’ was a chillingly beautiful work sung superbly by Merlyn Quaife and Christina Wilson.

This was a nicely balanced concert with generally lighter works in the first half and a more sombre and dramatic tone for the second half.  Very well sung by the three singers with fine accompaniment by Andrea Katz on piano, this was a memorable afternoon of song.

This review was first published in the Canberra City News digital edition of 20 May 2019.

Len Power’s reviews are also broadcast on the Artsound FM 92.7 ‘In the Foyer’ program on Mondays and Wednesdays at 3.30pm.
Posted by Canberra Critics Circle at 7:31 AM