ARMS AND THE MAN 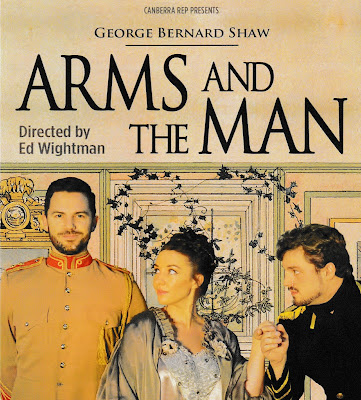 George Bernard Shaw’s first commercial success, ‘Arms and the Man’, first produced in 1894, has been given a fine new production by director, Ed Wightman and his Canberra REP group of actors.

When a Swiss mercenary from the Serbian army, Captain Bluntschli, breaks into her room, an idealistic young Bulgarian woman, Raina, is shocked at his pragmatic and cynical attitude towards war.  Nevertheless, she allows him to hide from the soldiers searching for him.  Although she is engaged to war hero, Sergius, her interest in the Captain is obvious to the audience if not immediately to her.

On the surface a romantic comedy, Shaw’s play satirises preoccupations with appearance and the opinions of others, the injustices of class discrimination, the dangers of glorifying warfare and the oppression of women.  It’s not a dusty old classic to be merely admired – it’s a vibrant, entertaining play full of ideas that seem as fresh today as when it was written.

Lexi Sekuless gives a memorable performance as Raina.  She is impressive to watch as the insecurities break through the surface of her character’s previously ordered world.  Her verbal and physical comic timing as she becomes more and more desperate to maintain control is especially enjoyable.

Joel Hutchings is a dashing and believable Captain Bluntschli and handles the irony in Shaw’s dialogue very well.  Riley Bell is amusing as the blustering Major Sergius and there are uniformly fine performances from the rest of the cast.

Ed Wightman has given the play a sumptuous production with a finely detailed, attractive set by Quentin Mitchell and beautifully detailed period costumes by Anna Senior.  He has obtained very strong, in depth performances from his cast.

Music for the production has been well-chosen to create the atmosphere for the play’s location in time and place.  Aided by the energetic choreography of Annette Sharp, the unexpectedly rousing finale and curtain call was perfectly judged.

This review was first published in the Canberra City News digital edition of 19 May.