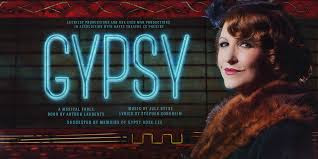 
The role of Rose, the mother of all stage mothers, in the musical “Gypsy”, is acknowledged as the Everest of musical theatre roles. On Broadway such theatre legends as Ethel Merman, Patti Lupone, Angela Lansbury and Bernadette Peters have been acclaimed for their interpretations of this role. In Australia few who saw Gloria Dawn, Toni Lamond or most recently, Caroline O’Connor, will forget their memorable performances in the show which many claim is “the greatest of all musicals”.


For his production, director Richard Carroll has thrown away the template of previous productions to re-imagine this show as a chamber musical in the Hayes Theatre house style.  With the help of a resourceful set and costume design by Alicia Clements, and a truck-load of props, Carroll has devised a gritty production in which just nine actors conjure up the milieu of the hard-slog, shabby show-biz world of vaudeville and burlesque. A world in which Rose battles to eke out an existence for herself and her two untalented daughters, who, she’s convinced, will become “stars”.


Of Rose, Sondheim has said, “the fact that she’s monstrous to her daughters and the world is secondary…she’s a very American character, a gallant figure and a life force”.


Blazey Best, who gave such a remarkable performance in the previous Hayes Theatre production of “Miracle City”, takes on the role of Rose in a startlingly uncompromising tour-de-force performance which will certainly sear itself into the minds of all who see it.


Her Rose snarls at everyone in a curious clenched-teeth, slurring delivery which sometimes compromises the clarity of Sondheim’s lyrics. She shouts her songs rather than sings them, and it is not until the second act, when she is challenged by her daughter, Louise, that any rays of humanity are allowed to emerge.


Best plays the entire show on full throttle, leaving little petrol in the tank for the climatic “Roses Turn”, which although delivered at almost frightening intensity, fails to move as it should. It’s a technically brilliant performance which will ripen when Best locates some heart and soul for Rose.


As Louise, Roses’ eldest daughter, Laura Bunting gives a compelling performance as the shy, adolescent slowly growing aware of her mother’s motives when Rose begins molding her into their next meal ticket as a budding burlesque queen, when her sister, Baby June (Jessica Vickers) flies the coop.


Her singing of the charmingly staged “Little Lamb” and the duet with Vickers “If Momma Were Married” provides two of the vocal highlights of the production, and her strip routines, performed towards the end of the show, are the closest yet witnessed in any production of “Gypsy” to those of the real life Gypsy Rose Lee.


Ingenious staging by Carroll and spot-on choreography by Cameron Mitchell keep the hard-working cast, including Joe Accaria’s versatile four-piece band, busy playing multiple roles. The results are sometimes surprising, occasionally confusing with very little time for anyone to make a real impression. Standout performances however include Mark Hill as Tulsa, brilliantly tap-dancing through “All I Need is the Girl”, Jane Watt, first as the sassy put-upon director’s audition assistant, then, hilariously, as the shop-worn stripper, Tessie Tura, and Anthony Harkin as the Rose’s long-suffering, but smitten, agent Herbie.


But in the end, and despite its title, “Gypsy” is all about Rose, and while this production is never less than interesting, its success will rest on how audiences respond to Blazey Best’s brave and idiosyncratic performance in this role.
This review first published in Australian Arts Review. www.artsreview.com.au
Posted by Canberra Critics Circle at 1:06 PM