THE ASPIRATIONS OF DAISE MORROW

Adapted from Patrick White’s short story ‘Down At The Dump’
Directed by Chris Drummond
Far And Away Productions and Brink Productions
The Playhouse, Canberra Theatre Centre to 5 May

‘Death isn’t death unless it’s the death of love’, says one character towards the end of ‘The Aspirations Of Daise Morrow’.  The poetic sensibility of this adaptation remains true to the spirit of the work of Patrick White and weaves a magical spell around the audience in a cleverly immersive production.

Based on ‘Down At The Dump’, one of Patrick White’s short stories from his collection, ‘The Burnt Ones’, published in 1964, the play focusses on a group of characters from White’s often-used fictional suburb of Sarsparilla.  The funeral of Daise Morrow is taking place while scrap dealers, the Whalleys, plan a day out at the Sarsparilla dump beside the cemetery to avoid attending the funeral.  In conversations and reminiscences we learn about the life of Daise Morrow and the other characters and observe how life has its own ironic way of bringing people together and having history repeat itself. 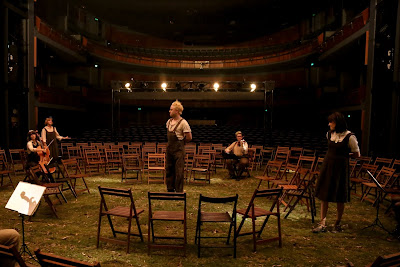 This startling production, played without interval, requires the entire audience to sit onstage in a radiating, circular seating pattern at the Playhouse.  The auditorium seats are not used at all.  The stage floor is covered with real turf which feels soft and lush underfoot and the pleasant grassy aroma creates an instant and appropriate atmosphere for the play.

The cast of four play multiple characters, jumping back and forth in time.  Much of the play is spoken in the third person.  It feels like someone is reading a novel to you and the actors are part of your imagination as they perform closely around and behind you.  Adding to the atmosphere, four string musicians are also placed amongst the audience and play romantic and wistful original music to underscore the action.

Michael Hankin’s set design is adventurous and very effective as are his costume designs for both cast and musicians.  Nigel Levings’ lighting design to suit this unusual production is an outstanding achievement.

Director, Chris Drummond, has produced a show that is different, exciting and memorable.  It’s demanding and you have to concentrate, but it’s a highly involving and ultimately memorable theatrical experience.

Photos by David James McCarthy
Len Power’s reviews are also broadcast on his ‘On Stage’ performing arts radio program on Mondays and Wednesdays from 3.30pm on Artsound FM 92.7.
Posted by Canberra Critics Circle at 11:09 AM