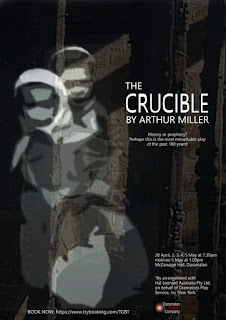 Directed and designed by Joe Woodward
Presented by the Daramalan Theatre Company
McCowage Hall, Daramalan until 5th May, 2018


Arthur Miller’s searing 1957 play in which fictionalised events from the 17th century Salem witch trials are portrayed as an allegory for McCarthyism, proved an excellent vehicle for the Daramalan Theatre Company.


Tight direction, imaginative scenic and costume design, well-rehearsed, committed performances from the youthful cast and close attention to the text, combine to capture the essence, and bring a sense of authenticity to a powerful play which makes huge demands on its actors and creative team.

For this production, the audience occupy tiered seating arranged around three sides of the playing area. The cast perform in front of a huge backdrop, transparent enough for the audience to glimpse shadowy images of figures dancing, as they enter the theatre. As the play progresses video footage and abstract slides are projected on to the backdrop, which together with Bartholomew Bunk’s moody incidental music, heighten the atmosphere, and comment on critical events in the play.

The excellent costumes are predominately black, with strong silhouettes which hint at period. When for a key scene, one of the characters is dressed in virginal white, the effect is striking. While most of the female cast wear appropriate hairstyles or scarves, the male cast sport a variety of modern hairstyles, which tends to be disconcerting, especially when portraying elderly villagers.

Director, Joe Woodward, has wisely encouraged his actors to develop strong individual characterisations. This has resulted in some excellent individual performances, well supported by committed ensemble work. Particularly impressive among the female cast are Sophia  Marzano, who displays admirable presence, as the vengeful Abigail and Zara McCann, compelling  as the frightened and confused, Mary Warren. Mikayla Brady also gives an eye-catching performance as the dignified Elizabeth Proctor.


Among the male actors, Jack Curry as John Proctor, Hayden Hamilton as Francis Nurse, Mitchell Dwyer as Deputy Governor Danforth, and Joey Gardiner, riveting with his idiosyncratic interpretation of Ezekiel Cheever, all impressed with well-conceived and delivered performances.
While great attention had rightly been devoted to interpreting and delivering the text, the lighting design, which created an appropriately mysterious atmosphere, often shadowed the actor’s faces. As well, the direction, which required the actors to move around the stage to deliver their lines to the three sides, and an unhelpful hall acoustic, resulted in many vital lines being lost, making it difficult to follow the complexities of the plot.


Never-the-less, the Daramalan Theatre Company have succeeded in staging an impressive production of a difficult, but important play which remarkably, continues to challenge and address issues of concern to  contemporary audiences.
Posted by Canberra Critics Circle at 11:41 PM