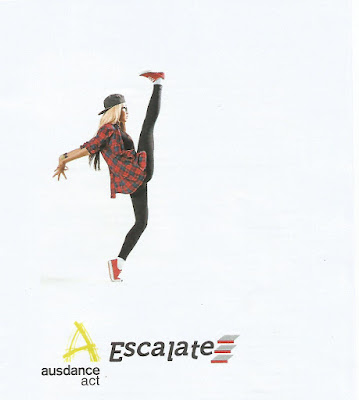 
This is the third season of performances of works resulting from Ausdance ACT’s mentoring program for young dance makers, “Escalate”, curated by the 2017 Canberra Artist of the Year, Liz Lea.
Again the eight dance works and two films which formed the program displayed an admirable variety in approach by the choreographers, and resulted in an interesting, well-danced program, supported with efficient stage management and evocative lighting design.


Ena Haskic’s work, “The  Moment”, proved an effective opening for the program. Danced by Haskic and Sophie Forde, costumed identically including their hairstyles, who mirrored each other’s movements to evoke a sense of the past and present. Exquisitely costumed, Maheyrin Chowdhury choreographed and performed a solo in traditional Bharatnatyam Indian classical style, entitled “Woman of Beauteous Spring”, which displayed her finely honed technique to riveting affect.


Clare Healey incorporated interesting film, well planned lighting design and the music of the Fall Creek Boys Choir to create an impressive solo, which she danced herself, entitled “Finding Hope”.  Identically costumed in long black dresses with bright red underskirts, Tara Coughlan and Sinead Shorka performed a lovely duo entitled, “Gemini”, inspired by the Gemini constellations and the myth of twin spirit, which they choreographed together with Liz Lea, and will perform for the World Dance Alliance in Adelaide in July.


Choreographed by Hikma Aroub and Leena Wall and danced by Aroub, Kat Brown and Holly Waldron, “Moments in Time” was a well-constructed trio, danced against a filmed background, gently exploring the fragility of friendship. Ashlen Claire Harkness also utilised film of Nisha Joseph narrating her anxieties as a striking background for her improvisational work, “Core”, performed by Arabella Frahn-Starke, Isabelle Beauverd and Oonagh Slater.


Clever lighting represented barriers for Evan Liversidge, Chris Wade and Harry Wade in Claire Liversidge’s work, “Contained” which also incorporated interesting shapes and effective unison work effectively performed by the dancers. An energetic biographical hip hop solo “Pass the Boundaries” created and performed by Carol Blazeski was the final work in a program which provided a fascinating insight into the diversity and quality of dance making in Canberra.