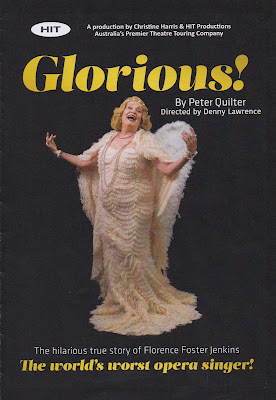 Reviewed by Frank McKone
Thursday May 3

What a glorious week for a reviewer it’s been!  Populist champagne-popping selfie theatre at The Spiegeltent (Blanc de Blanc, April 27); esoteric literary deep and meaningful theatre on grassy turf on the stage at Canberra Theatre Centre Playhouse (The Aspirations of Daise Morrow, May 1); and now warm empathetic humour theatre at The Q.  Glorious!, billed as hilarious comedy, in this production comes over as a sympathetic study of the relationship between Florence Foster Jenkins – the world’s worst opera singer – and her pianist, Cosme McMoon.

Many times I have praised The Q for its intimate community atmosphere.  On this occasion sympathetic feelings had rapidly spread through the staff on Monday for Joshua Sanders, the regular Cosme McMoon.  Artistic director Stephen Pike told them of Joshua’s sudden hospitalisation and that the show must be cancelled on its opening night on Wednesday.  By Thursday, at the new opening, we heard good news that he is recovering.

As we entered the theatre, sympathy abounded then for the cast, after, I believe, being able to have only four hours’ rehearsal with Alister Kingsley – book in hand – and retired  co-director of Canberra Academy of Music and Related Arts (CAMRA), Colin Forbes.

The youthful Alister – looking perfect for Cosme, and coming with a Bachelor of Fine Arts (Music Theatre) at the Victorian College of the Arts (VCA) – was able very cleverly to smoothly pass over his playing of the piano, on stage, on to Colin – one-time Australian Opera repetiteur – playing off stage for the more extended and demanding pieces.  Diana McLean, singing gloriously and amazingly, slightly off-key with Florence Foster Jenkins’ erratic timing, never missed a beat.  Our concern for Joshua and for the cast and director Denny Lawrence – who had explained the situation to the audience from the stage before the action began – was soon overtaken by admiration for the skills of these performers.

Florence Foster Jenkins – she seemed always to insist on her full title as if she were royalty – was excruciatingly funny, but gradually, despite her assumption that her inherited wealth entitled her to impose herself on the world as she saw fit, we found ourselves appreciating, along with Cosme, that her lack of self-awareness was beyond her control.  Where early on we thought he would only play for her because she had the money to pay him (three times what the restaurant offered), when it came to the incredible idea of her performing at Carnegie Hall, it was not just a chance for him to play there, but represented a grand risk and chance for fulfilment for her.

This is the same risk that all artists take – indeed, these very performers on stage before us in this production – no matter how ‘good’ we may judge them to be.  Though this is “The hilarious true story of Florence Foster Jenkins”, we end up not laughing at her, but alongside her, with empathy for her determination while objectively observing her failings.

I guess this was not the case for a large proportion of the 3000 people who cheered her on in the Carnegie Hall in 1944, even though she vetted as 'my friends'.  As Carnegie Hall Museum Director and Archivist, Gino Francesconi, has said: "One of the most wonderful things about Carnegie Hall is the continuum of what Andrew Carnegie said at the laying of the cornerstone in 1890, which was, 'All causes may here find a place; we hope they're good causes, but it's not for us to judge'."
[ https://www.classicalmpr.org/story/2016/08/12/florence-foster-jenkins-a-curious-concert-at-carnegie-hall- ]

Peter Quilter, I guess, may have had the spirit of Carnegie in mind in writing this play – and I guess the feeling, watching Glorious! and the many and varied shows presented by Stephen Pike, is something like the same for The Q.  The audience last night, I’m sure, were highly appreciative – including, of course, not only of the highly developed character of Diana McLean’s Mrs Jenkins, but especially of Kaarin Fairfax’s wonderful transitions from feisty Mexican Maria, vicious critic Mrs Verrinder-Gedge and naive disciple Dorothy.  These comic foils gave us a proper perspective, and helped us to recognise the truth in Alister King’s playing of Cosme.

Our concern for the absent Joshua and sympathy for director Denny Lawrence’s plight were certainly expressed in our applause, as well as our praise for design and directing well done.  What a genuinely nice piece of theatre to finish my week. 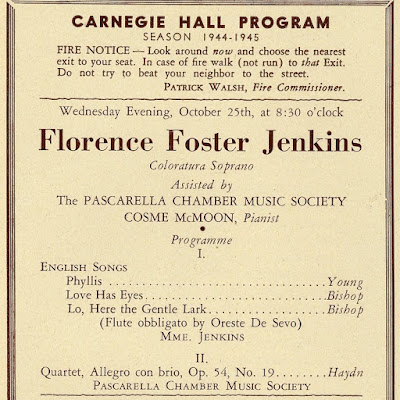 Posted by Canberra Critics Circle at 11:45 AM