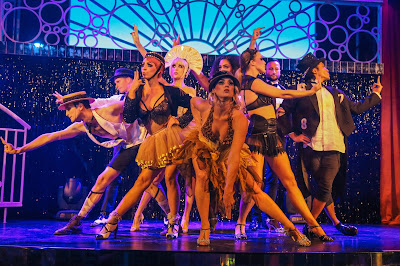 
The Spiegletent – Canberra Theatre Centre forecourt until 20th May 2018


Performed in the beautiful Fortuna Spiegeltent, the biggest of the spiegeltents currently touring Australia, and boasting a cast of world-class acrobats and dancers, all sporting seriously ripped bodies which they’re happy to flaunt, with or without the lavishly bejewelled and spangled, costumes, “Blanc de Blanc” provides a deliciously, decadent evening of sensational acrobatic feats, classic burlesque and in-your-face nudity.


A discourse on  the pleasures of champagne, delivered with cheeky insolence by the show’s suave Maite d’, Monsieur Romeo, provides the through-line for a succession of stunning acts, each more amazing than the last, punctuated by well-choreographed dance routines, genuinely funny physical comedy routines, and slickly staged  eye-candy.


Like most of the rest of the cast, Monsieur Romeo began the show elegantly costumed, but by interval had stripped to black speedo’s to wallow in a bubbling hot-tub, much to the delight of the first-night glitterati, who literally fell over each other to be photographed with him, and other similarly attired members of the cast, in a strange interlude towards the end of the other-wise fast moving show.
Several of the featured acts have previously performed with Cirque du Soleil, including the impossibly slender, Spencer Novich, who together with the glamourous J’aiMime, provided much of the comedy with his unusual mix of mime and contortion. Contortion also featured in Shun Sugimoto’s astonishing turn which drew gasps from the first night audience. Milena Straczynski, sporting bright red hair, amazed with her astonishing strength and flexibility performing high above the heads of the audience in a glass-bottomed, hotel luggage trolley. Later she teamed with partner, Hampus Jansson to perform an erotic double act swinging precariously from aerial straps.


Posted by Canberra Critics Circle at 11:16 AM