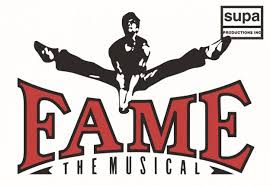 
Based on a 1980 movie which spawned a six-season television series, and this stage version, “Fame – The Musical” tells the story of several students who attend the High School of Performing Arts.  Despite its lack-lustre score and a set of self-obsessed characters with whom it’s hard to engage, this musical has received hundreds of productions around the world. Indeed Canberra has seen several, both professional and amateur.


For this production, Supa Productions has assembled a young and energetic cast, but despite their obvious commitment, it’s difficult to believe that many of them would have made it into a School of the Performing Arts, or that such a school would be staffed with such dour, uninspiring teachers.


The production’s strength’s include its excellent set design, the cleverly choreographed, though often carelessly-performed, dance routines, and a terrific band, which on opening night played so enthusiastically that a duet between two teachers became a screaming match.


There are strong performances from Janie Lawson as head teacher, Miss Sherman, Pippin Carroll as the quiet pianist, Schlomo, Maddie Betts as the tragic, fame-obsessed, Cameron Diaz and Jack Tinga as the talented but dyslexic dancer, Tyrone. Chris Baldock brings quiet dignity to the largely cameo role of Mr Myers. Elsewhere there are some promising performances among the large ensemble cast which will doubtlessly flower during the season but on opening night lacked sufficient nuance to convince as believable characterisations.


But if you’re looking for an evening of entertaining musical theatre, this production has much to recommend it including a knock-out finale and the opportunity to spot your own future star among its large cast of young emerging talent.


This review first published in the digital edition of 'CITY NEWS' ON 12.05.18