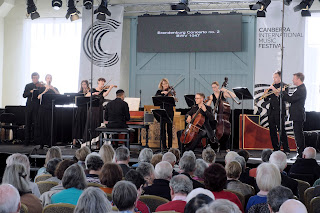 Bach on Sunday is a fine combination in the tradition of the Canberra International Music Festival. As Roland Peelman wrote in his introductory notes, the repertoire chosen for the concert celebrated Bach’s ‘ear for characteristic instrumental colour and uncanny ability to extract both subtle and strikingly original effects from the instruments and players at his disposal’. Actus Tragicus BWV 106, ‘Gottes Zeit ist die allerbeste Zeit’ presented a glorious interweaving of the voices of tenor- Richard Butler; bass- Andrew O’Connor; soprano – Susannah Lawergren and alto – Tobias Cole directed by Madeleine Easton. The blend of cello, recorder and organ continuo created an underlying web of intricate supporting accompaniment.

The Bach Akademie Australia’s interpretation of the Brandenburg Concerto No. 2 began at rather too cracking a pace – prestissimo rather than a lively Allegro, but equilibrium was restored in the Andante and more-or-less maintained in the final Allegro Assai. Baroque Trumpet player Richard Fornison made some swift and effective manoeuvres with ornamentation to accommodate the pace and remained hero of the day, finishing with pure triumphant final notes. The distinctive presence in the ensemble of recorders instead of more commonly heard flutes gave a fresh sound to this well-known work.

Daniel Yeadon’s performance of the Sonata in G minor for Viola Da Gamba No.3 BWV 1029 tested the acoustic of the Fitter’s Workshop, with the delicate voicing of the solo instrument masked by the harpsichord in the first movement. In the Andante a better balance was achieved and the exquisite melancholy theme soared and the even sound was maintained to bring the final Allegro movement to a satisfying conclusion.

With the addition of Andrew Fysh singing bass, the vocalists returned to the stage to perform Kantate BWV 175, ‘Er ruftet seinen Schafen’. It was pleasing to hear Tobias Cole perform the aria, Komm, leite mich, his male alto providing a strong and distinctive voicing in the work. The splendid Chorale: ‘Nun, werter Geist, ich folg dir’,sparkled at the conclusion of the Kantate, lingering like a blessing from the composer at the end of the concert. 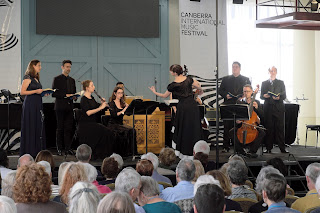