TRASH AND TREVOR - The Best of Trevor Ashley

Written and Performed by Trevor Ashley 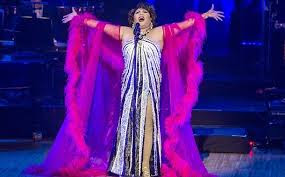 Writer/Musical Director/ Producer and performer, Trevor Ashley is one of Australia’s busiest entertainers and theatre makers.  Having appeared in leading roles in a string of big budget musicals including “Priscilla-Queen of the Desert” (Miss Understanding), “Les Miserables” (Thenardier), “Hairspray” (Edna Turnblad), “The Producers” (Franz Leibkind) and “Jesus Christ Superstar” (King Herod), and directed a very successful production of “The Heathers – The Musical”.
He’s produced and performed a string of satirical adult pantomimes including “Fat Swan”, “Little Orphan Trashly”, Diamonds are for Trevor”, “I’m every Woman”, and two shows on Liza Minnelli, “Liza (on and E)” and Liza’s Back (is Broken)” and is due to open in the Sydney Opera House next week in his latest show, a send-up of “The Body Guard – The Musical” entitled “The Bodybag”.

“Trash and Trevor” which he gave a one-off performance in the Fortuna spiegeltent  as part of the “Blanc de Blanc” Canberra spiegeltent season proved an excellent sampler of Ashley’s unrivalled talent for pricking the balloons of famous cabaret divas.
No diva was left unscathed in a tight 60 minute performance for which Ashley was accompanied by a tight three-piece combo of long-time collaborators, Bev Kennedy on keyboards, Tina Harris on bass and Aggie Davis on percussion.  A pile of wigs and clever costume changes, accomplished seamlessly in front of the audience, saw Ashley seemingly miraculously transformed into Liza Minnelli, Shirley Bassey, Tina Turner, most hilariously, Cher, and rather cruelly, Whitney Houston.


Unlike many drag artists, Ashley sings in his own voice, a shattered instrument which he   drives mercilessly to produce, sometimes to his own apparent surprise, recognisable approximations of the divas he is skewering.  Some of his songs are clever parodies, while others like “I’ve Never Been to Me”  and “People” are given heartfelt, reflective performances which brought depth to his act. His connecting dialogue was clever and funny, though some were confronted by some misjudged coarseness which tainted the performance unnecessarily.
As he noted during the performance, it has been more than twenty years since Ashley last performed in Canberra. On the strength of the reception given this performance, this uniquely talented performer seems assured of an enthusiastic audience awaiting his next Canberra foray.