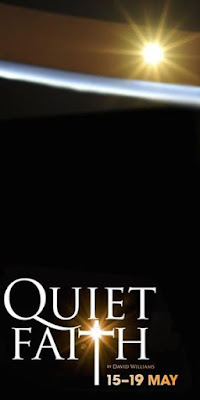 QUIET FAITH
Written and directed by David Williams
An Alternative Facts Production
The Courtyard, Canberra Theatre Centre to 19 May

Developed from interviews with twenty Australian Christians as well as conversations with believers across Australia, ‘Quiet Faith’, according to the director, is “an attempt to listen closely to these voices and thereby start rethinking the place of faith in public life.”

The director’s notes state that “Conversations were structured around three key questions: how would you describe your journey of faith?  How does faith manifest itself in your everyday life? And what do you think is, or should be the relationship between religion and politics?”

Two performers, Rose Maher and the writer and director, David Williams, speak the words of the people interviewed.  To maintain realism, the dialogues retain the ‘umms’, ‘ahs’ and ‘you knows’ of everyday speech.  Interludes of religious music break up the speeches and there are moments where the audience is invited to join the performers in singing and prayer.

The circular performance space has been attractively designed by Jonathon Oxlade but the circular rows of bench seating with no back support may be unappealing to some audience members.  Cushions to sit on are available at the door as you go in to the theatre.

Religious faith and why some people have it and others don’t is not an easy thing to comprehend, let alone capture for a theatrical production.  In spite of the three questions posed, the interviews and conversations presented in this production did not produce a clear picture on this subject.

The director seems to have chosen to allow the words from the interviews to speak for themselves, with little variation in character by the performers from one interviewee to another.  The result is bland and, especially when the interviewees seem to digress from the point, rather uninteresting.

There seemed to be no reason for the audience to be involved in singing and prayer in this production except to break up the dialogue.  It’s possible that not everyone in the audience would be comfortable with these sequences.

As a theatre performance this show lacked the dynamics to engage an audience, the content of the interviews and conversations were not very interesting on a human level and were insufficient to cause “a rethink of the place of faith in public life.”

Photos by David James McCarthy
Len Power’s reviews are also broadcast on his ‘On Stage’ performing arts radio program on Mondays and Wednesdays from 3.30pm on Artsound FM 92.7.
Posted by Canberra Critics Circle at 11:53 AM