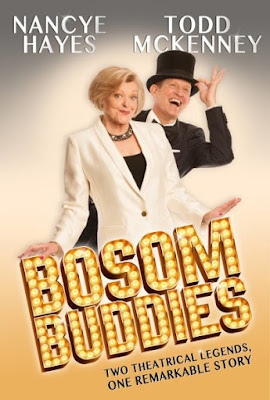 “Thirty years” says Todd McKenney. “How about you?” “55” replies Nancye Hayes.  Together, these legends of the Australian musical theatre stage have sung, danced, tapped and acted their way into the hearts of a nation. Together these shining stars of the stage have notched up ninety years of dazzling performances, thrilling the crowds, and bringing that incandescent touch of Broadway into our lives. And through it all they have remained bosom buddies.


For two hours they hold their audience enthralled, wrapped in a heart-warming aura of sheer nostalgia as Hayes and McKenney comment on clips from their hit musical, reminisce over cute childhood images, recount their experiences on This is Your Life and Dancing With The Stars and through it all offer unforgettable snatches of song and dance. They are your consummate hoofers and old hoofers never die. They just keep on tapping and singing their way into the history of the Australian musical stage.


And for any naysayers who might dare to suggest “they’re past it” or “over the hill” Bosom Buddies is proof positive that these two glorious entertainers can still hit the notes or trip the light fantastique. In an evening of armchair theatre, combined with snippets of two brilliant careers, Hayes and McKenney trace their lives and careers from Hayes’ spectacular success in Sweet Charity and McKenney’s starring role in 42nd Street. The inspiration came much earlier, when Hayes was taken to “Annie Get Your Gun” and McKenney danced for his dancing teacher Mum. Their paths were set and along the way stories of laughter, tears and show after show became the recipe for a wonderful evening of anecdote, reminiscence and showbiz pizzazz. Hayes still commands that centre stage with Charity arms held high. McKenney can still do the terpsichorean twirl and touch the heart with his favourite Tenterfield Saddler. Above on the screen Peter Allen in concert shows why the Boy From Oz reached out to change Todd McKenney’s life.


For all those in the audience who can still remember, this show is a joyous trip down memory lane.  The Allen Brothers on Brian Henderson’s Bandstand, Pauline Hanson’s dubious dancing the cha cha contrasted with Sonia Kruger’s exquisite partnership with the elegant McKenny. This is their lives, but it is also the lives of many of the audience who were there and may still recall Hayses’s Fastrada in Pippin or Sally Bowles in Cabaret or McKenney’s decadently mischievous MC.  Bosom Buddies is the gift of two very dear friends to the audiences they love.


During the interval, the audience is asked to write questions on one hundred dollar bills which are then collected by the Kit Kat Club’s MC. As the makeup is removed, Hayes reads out the tit bits of private information that the questions elicit. Stories of costume mishaps, favourite moments, a husband’s ashes that came to McKenney’s show, a heart attack victim resuscitated by a Priscilla cast member in an Emu drag outfit. The stories of a career full to the brim of success and delight tumble forth from the hundred dollar bills as we revel in a night with these two remarkable and generous performers.

And why do they do it? Let Hayes have the last word. “We love it” And your audiences love you too. Bosom Buddies will be performed in an abridged version at the Adelaide Cabaret Festival next month. Don’t miss it. And Todd and Nancye, thanks for the memories.