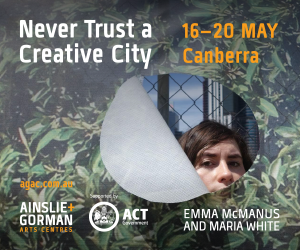 ‘Never Trust a Creative City’, part of the Ralph Indie program, is described by its creators as ‘a response to the neoliberal forces (re)shaping our cities in the present’.  Asking themselves how artists fit into this landscape, they became interested in cultures of gentrification.  It didn’t take long for them to observe that artists who move in and make a city more vibrant - which benefits developers and property owners - are soon priced out of the area they helped to improve.

It all sounds a bit heavy but the co-creators, Two Rude, have fashioned a wild and wacky ride through an artistic and gentrification minefield which is very entertaining as well as thought-provoking.

The show commences with a ‘History Of All Time’, a 15 minute slideshow summation of the arts from the beginning of the world, which is perceptive and very funny.  We realize what a major role jellyfish have played in history, not to mention DJ Khaled, American DJ and author.

Quickly moving on, the two performers make the observation that ‘artists are the canary in the coalmine of gentrification’.  In a hilarious sequence, they day-dream their way through the issues that are concerning them, posing worrying questions and suggesting radical solutions but then pointing out the flaws in each other’s arguments.  Important questions are covered like, ‘How will we navigate through the world if it all looks the same – Google Maps?’ and profound statements are made, such as ‘There’s only one difference this year and that difference is drones’.

This is followed by a well-edited video sequence about the issues raised and, having decided that ‘there’s nothing more marketable than a dead artist’, they sell out and ‘Take the Money’.  At that point, science fiction takes over and they, of course, become jellyfish.

Co-creators and performers, Emma McManus and Maria White, display great chemistry together onstage.  They are natural comedians with excellent timing and their show has been carefully constructed to make a point but in a very entertaining fashion.

The show’s lighting has been well designed by Emma Lockhart-Wilson.  Tom Hogan’s sound design adds nicely to the atmosphere and costume designer, Verity Mackey, has produced the best jellyfish costumes I’ve ever seen.

This review was first published in the Canberra City News digital edition of 18 May.

Len Power’s reviews are also broadcast on his ‘On Stage’ performing arts radio program on Mondays and Wednesdays from 3.30pm on Artsound FM 92.7.
Posted by Canberra Critics Circle at 10:25 AM