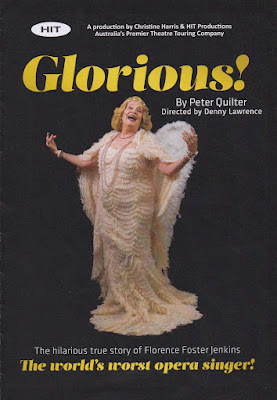 Debate still rages over whether Florence Foster Jenkins knew she couldn’t sing.  This New York society woman who sang at concerts from the 1920s to the early 1940s controlled the guest list to keep music critics out and was once heard to say, ‘People may say I can't sing, but no one can ever say I didn't sing.’

Peter Quilter’s play, ‘Glorious!’, originated in London’s West End in 2005 and has been an international hit in over 40 countries.  It’s a straightforward account of significant moments in her performing life after meeting pianist, Cosme Moon, who accompanied her at her concerts right up to her famous final concert at Carnegie Hall in 1944 when she was 76 years old.

Playing Jenkins is Dianna McLean who captures the spirit of this woman very nicely.  She’s ignorant and self-delusional in some ways but there’s a sharpness and a hint of loneliness and warmth as well that makes us question our perceptions of her.  McLean gives us a well-rounded characterization that we grow to love in spite of her faults.  It seems strange to be criticizing a performer for singing too well, but Dianna McLean sang some passages of the songs more tunefully than expected.  However, she gave us a ‘Queen Of The Night’ aria that was magnificently appalling.

Due to the sudden illness of cast member Joshua Sanders, the role of the pianist, Cosme Moon, was played at short notice by Alister Kingsley with script in hand.  He played the role so well that I became unaware very quickly of the script he was reading from.  Kingsley’s great sense of timing and the charm he brought to the role were particularly effective and funny with Cosme’s diplomatic handling of Jenkins’ questions about the quality of her performances.

While usually played onstage by Cosme Moon, the piano accompaniment for the opera arias was played off-stage very well by Canberra’s Colin Forbes for this performance.

The show was directed very well by Denny Lawrence at a nice pace and with strong characterizations.

‘Glorious!’ is a very enjoyable play about a fascinating woman who was one-of-a-kind.