Canberra Theatre Centre
Until May 30

What does one do when your small country of Pontevedro is bankrupt? Why, drink of course! And hold a Ball to entice wealthy widow Hanna Glawari to marry your last hope of saving the country's finances - Count Danilo. Whilst drinking. Did we mention there will be champagne? 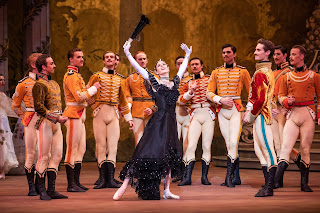 Lana Jones and artists of the Australian Ballet, photograph by Daniel Boud

Opening night of this beautifully resplendent ballet, "The Merry Widow", saw former Canberra dancer Lana Jones in the lead role of Hanna and Adam Bull, a suitably wonderful lead, as the dashing and perennially pickled Count Danilo. Ako Kondo danced Valencienne with a lovely balance of joy and solemnity. Kondo was partnered by Chengwu Guo as Camille, her dashing lover - but she is torn by her loyalty to her husband, Baron Zeta. Colin Peasley gave a touching performance as the Baron, who eventually realises and accepts with grace and dignity that his younger bride's heart lies elsewhere. Peasley's sidekick Njegus provided many of the comedic moments with a delightful performance from Franco Leo.

This production had everything in spades. The lush, beautiful costumes, from the ball gowns in Act 1, the rich reds in the second act and the Belle Epoque dresses, replete with amazing hats in the final act were stunning and the set with its fairylight chandeliers, textured layers, muted bronze, rich reds and faux garden fountain impressed. 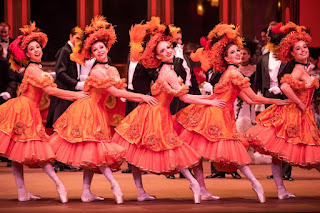 Artists of the Australian Ballet in The Merry Widow, photograph by Daniel Boud


Kondo and Guo gave a nuanced and believable performance as the lovers, but their lifts were not effortless. The regular attempts from Camille to clutch Valencienne's breasts, however, were!

Jones and Bull's chemistry developed toward the end of the show. Their nostalgic pas de deux as younger lovers was poignant and beautifully staged. When Danilo cradles Hanna's head as they waltz to the recognisable refrain, we melted. Several seasoned theatre-goers, familiar with many productions of both the ballet and opera of "The Merry Widow" admitted what a moving performance this had been and did not deny shedding a tear.

The male corps, notably the two, striking court attendants, in Act 1 gave an entertaining balance of dashing charm and caddish drunkenness, as there were drinks, you see. Marcus Morelli's dancing in Act 2 was striking and assured as the lead dancer of the Pontevedrians, with their Cossack inspired choreography and costumes. His leaps and spins were executed with a lightness and impressive agility.

"The Merry Widow" is performed with most of the corps de ballet on stage. And champagne. The scenes are rich and bustling but space was noticeably tight during several ensemble pieces, with more than 25 dancers on stage, seeming to mildly restrict the freedom of some movements, at least giving an awareness of the space and how any errant arm or foot a centimetre off line could cause a collision.

The choreography may be less demanding than some classical ballets, but undertaken with freedom and joie de vivre, that made this such an appealing and moving show.

"The Merry Widow" was originally directed by Sir Robert Helpmann, commissioned for the Australian Ballet in 1975. Everything about this 2018 production produced a smile.

The Australian Ballet's production of "The Merry Widow" had the audience in raptures right from the opening bars of music and the sound of pointe-shoed feet taking their place on stage. The audience clapped when the local gal appeared, clapped when the leading man made his first appearance, laughed at all the stock jokes, applauded and gasped with wonder at the set changes and whistled and cheered at the curtain call. It goes to show Canberra audiences were absolutely primed for a visit from the Australian Ballet, performing a classical piece, and miss having them as a regular fixture on the calendar.

It is shows and theatre experiences such as this, that makes little girls fall in love with ballet and all the colour and theatre of it and dream of growing up to be a ballerina, as Jones, now starring as "The Merry Widow" did.